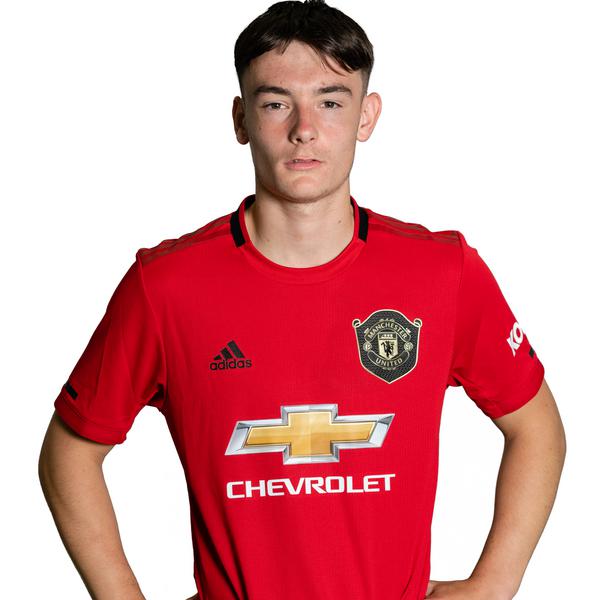 The classy midfielder came through the system at United and has joined Charlton Athletic on loan for the duration of the 2020/21 campaign.

A Wales international squad member, he has experience of playing in the European Championship at youth level with his country and also won the Victory Shield with the Dragons.

The creative schemer forced his way into the Under-18 Premier League North champions' line-up in 2017/18 and scored an important winner in the game at Middlesbrough recently en route to the North League title.

He performed in a number of roles throughout the team, playing a key role in the big game against Manchester City that proved decisive in terms of wrapping up the championship.

Not only did he contribute four goals that year but the teenager displayed real quality and, as expected, developed into a key performer in 2018/19. Taking on extra responsibility, his ability to pass positively through the lines shone through and he also displayed a cool head from the penalty spot - scoring one stoppage-time winner at Everton and again showing his prowess from 12 yards in the mini-Manchester derby.

Promotion into the Under-23s squad was well merited and he did not look out of place at that level, getting off the mark in Premier League 2 with another penalty - against Stoke City.

In 2019, Wales boss Ryan Giggs called him into an end-of-season training camp in Portugal and was so impressed he handed his fellow countryman a first call-up at senior level to join the squad for the Euro 2020 qualifiers.

Levitt made his full debut at club level in late November, completing the full 90 minutes in Manchester United’s 2-1 defeat to FC Astana in the Europa League. An international bow followed in September 2020, when he started a 1-0 win in over Finland. Days later, he joined Charlton on loan for the season.

Daniel explains why he's adapting his attitude in front of goal as he prepares to represent Wales.

Youngster Dylan Levitt is set to leave the club on a short-term deal.

There were a number of moves involving United in the latest window - here is your guide to the deals that happened.

Wales international midfielder's recall clause has been activated by the Reds.

United's representatives in the latest squads for the home nations have been confirmed.

Internationals: How did our players fare? Article

We summarise how 10 Reds performed with their respective countries during the recent Nations League games.

Wales international Dylan is the latest youngster to exit the club on a loan basis.

The work done in lockdown by James Garner, Teden Mengi and their U23 team-mates ensured they'll be ready if called upon.

"He’s my kind of player, a good character, quiet but tough," says Giggs when discussing a young United player...

We caught up with our legendary winger, who declared he has high hopes for a 19-year-old Red.

The boss gives his reaction to the Astana defeat and reflects on how United's debutants fared.