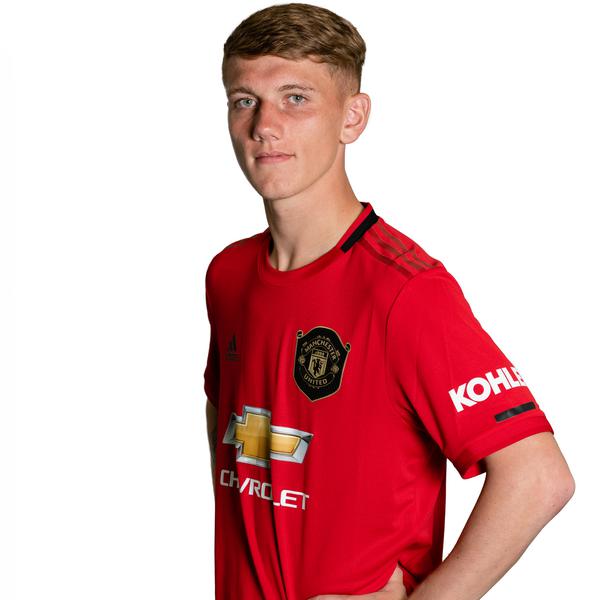 A Northern Ireland youngster who has become a regular with United's Under-23s.

Galbraith has represented his country at senior level and grown in stature with every passing season with the Reds.

After representing Linfield in his homeland, he impressed during a trial at the Aon Training Complex and was signed in the summer of 2017.

After Galbraith arrived at the club, the youngster helped the Reds win the Under-18 Premier League North title, with his explosive drive against Manchester City effectively sealing top spot in the division. It also won United's Goal-of-the-Month award for April.

A talented midfielder, he made 15 appearances in total (10 as a starter) and also impressed in the national final against Chelsea against more physically powerful opponents. His time as a second-year scholar saw him nail down a regular place as an important figure in the middle of the park. He amassed 25 appearances in all (21 as a starter) and scored four times for Neil Ryan's boys.

On 5 September 2019, after holding his own in the Under-23s side, he was handed a senior Northern Ireland debut by coach Michael O'Neill, as a late substitute in a friendly win against Luxembourg at Windsor Park.

He followed that up with a maiden appearance for Manchester United’s first team in late November, appearing for the final few minutes of the Reds’ 2-1 defeat to Astana in the Europa League.

After being part of the squad that travelled to Germany for the latter stages of the 2019/20 Europa League, he appeared in the only pre-season friendly before the delayed 2020/21 campaign got under way, coming close to scoring against Aston Villa. He continued to be part of Neil Wood's Premier League 2 side and showed his versatility by filling in at centre-half due to injuries.

Galbraith in contention for a place Article

Young midfielder Ethan could feature in the second leg against Real Sociedad at Old Trafford.

Is Hannibal in the manager's plans? Article

Ole Gunnar Solskjaer explains why we won't be seeing the teenager yet but he is "not far away".

Watch the best bits from an entertaining Manchester derby, including goals from Galbraith and Pellistri…

Goals from Ethan Galbraith and Facundo Pellistri helped United to a point, in an end-to-end contest with City.

Read all about a huge night for the Welshman - plus updates on Maguire, McTominay, van de Beek and Galbraith.

United's representatives in the latest squads for the home nations have been confirmed.

Academy prospect Ethan inks a new deal with the club until June 2023, with the option to extend for a further year.

Watch all the goals, plus reaction from coach Neil Wood, after the Reds' fine win in Premier League 2...

The Reds obtain a good work-out at Villa Park with Ole handing valuable minutes to a number of his squad.

Internationals: How did our players fare? Article

We summarise how 10 Reds performed with their respective countries during the recent Nations League games.