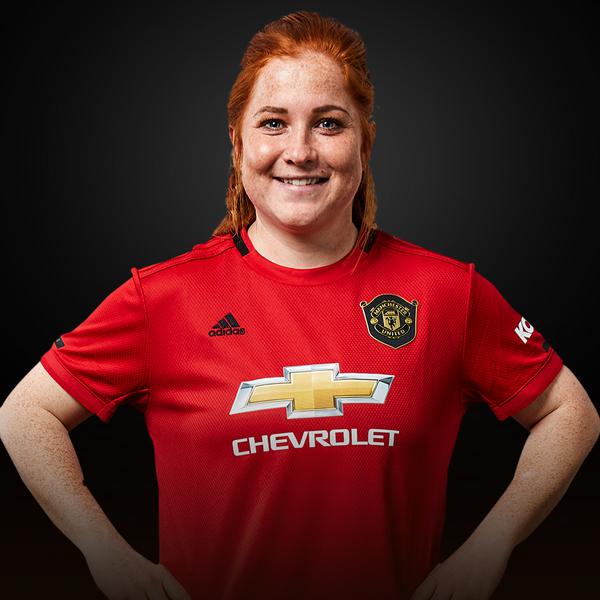 A defensive-minded full-back who is comfortable on either flank.

Harris came through the Lincoln youth system, before making her first-team debut as a teenager. She moved to Liverpool in 2013 and in her first year with the club became the winner of the inaugural PFA Women’s Young Player of the Year award. Two seasons later, she won Liverpool’s Player of the Season award. The defender comes from a family of footballers, with her two sisters and younger brother all playing at various levels. Her older sister Meg is married to United boss Casey Stoney. In her first year at the Reds, Martha was an integral part of our title-winning side and cemented her place as first-choice right-back. She played 22 games in all competitions and scored one goal - a penalty against Millwall. It proved to be a hugely significant goal for one United supporter, who agreed to shave his head as part of a bet if our no.2 scored. Harris has also impressed on the International stage and scored for England in the 2014 Under-20s World Cup.

Nemanja Matic was not in the squad against Liverpool and, in his pre-match interview, Ole Gunnar Solskjaer confirmed the Serbian picked up an injury in training.

Tony was not fit
says

Anthony Martial was also missing from the squad and that’s because the Frenchman had not completed the squad’s final session at the Aon Training Complex, according to Ole.

The injuries kept on coming
says

Our injury problems worsened when the action began as Herrera, Mata and Lingard were all forced off during the first half. Rashford also finished the game with a swollen ankle.

The atmosphere was one of the main talking points on Sunday: after those early injuries, the team needed support and our fans provided that to the nth degree!

Your star man was...
says

There were several impressive performances, especially in defence, but it was Luke Shaw who was voted our Man of the Match following a dominant display against Mo Salah.

As a result of the draw, and Arsenal’s 2-0 win over Southampton, we have slipped down to fifth in the Premier League table with 11 matches left to play.

Firstly, a minute’s applause was held before kick-off at Old Trafford on Sunday in tribute to our legendary former youth coach Eric Harrison, who sadly passed away last week.

Our next opponents, Crystal Palace, secured a 4-1 win at Leicester City and that presumably contributed to Foxes manager Claude Puel being sacked early on Sunday morning.

What happened in France
says

Our Champions League last-16 opponents PSG – who we face on 6 March – secured a Ligue 1 win over Nimes thanks to goals from Christopher Nkunku and Kylian Mbappe (2).

Meanwhile, our Under-18s recorded a 2-2 draw against Blackburn Rovers at Brockhall on Saturday, when Ethan Laird and Mipo Odubeko both scored first-half goals for Neil Ryan’s side.

Finally, Denis Law celebrated his 79th birthday on Sunday and MUTV subscribers can watch a brand new documentary about the legendary Scot via the on-demand section.

"Eric Harrison was a great coach and a great man. I'll never forget you and the way you worked with young players. You made them so great. Rest in peace."

Academy graduate Phil Neville has paid his own personal tribute to his mentor Eric Harrison.