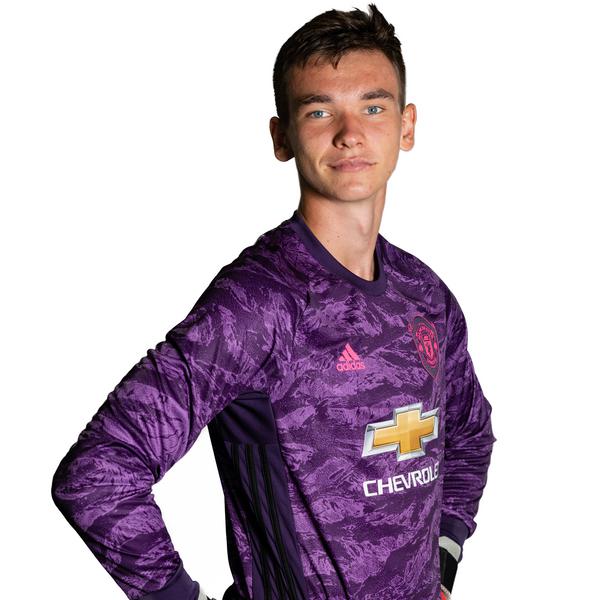 Giant keeper who is on loan with Swindon Town for the 2020/21 season.

He initially joined United from FC Slovacko following a successful trial, and did not require a work permit due to his EU status.

The Czech Republic youth international competed for the gloves at Under-18 level and even made his Under-23s debut at Old Trafford in the draw with Everton.

Kovar had a successful run of games in the youth team between February and the end of that season, which culminated in United winning the Under-18 Premier League North title. The young Czech was pushed into the Under-23s squad and made 19 appearances at that level, as well as keeping goal in the UEFA Youth League.

After training with the first team on several occasions ahead of UEFA Europa League fixtures in 2019/20, Kovar was selected as part of the travelling squad for the match against FC Astana in Kazakhstan, and was an unused substitute during the Reds' 2-1 defeat. His outstanding work in the Under-23, when he was one of the players of the season, helped gain promotion in Premier League 2 as he also proved adept at saving penalties as he grew in stature and confidence.

A triple from Everton's captain inflicts a harsh defeat on United in Premier League 2.

There were a number of moves involving United in the latest window - here is your guide to the deals that happened.

The young goalkeeper is back at United, after half a season with League One club Swindon Town.

Our talented Under-23s goalkeeper Matej Kovar is heading down south for the 2020/21 campaign.

Neil Wood's young Reds are all set for a return to Premier League 2 action tonight, live on MUTV.

Read our report on an invaluable afternoon for United's youngsters - and watch Chong and Garner's goals.

Under-23s rampant at the Riverside Article

Tahith Chong and Arnau Puigmal claimed two goals apiece in an excellent win at Middlesbrough for our youngsters.

Find out which players Solskjaer is taking to Serbia for our latest Europa League group game.

United's youngsters have a second game in the competition on Tuesday - at Lincoln City.

The club has clarified which players are eligible for our upcoming European games.