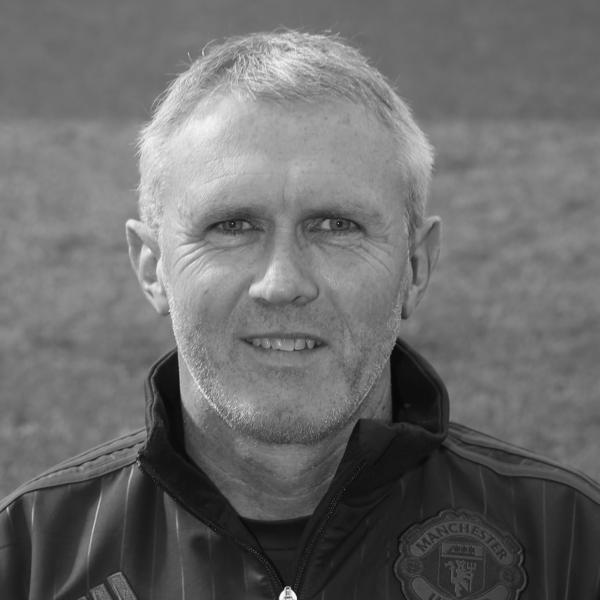 There isn’t a lot to tell when it comes to my football career.

I was fast, so I was always a striker. School team, Trafford Boys, Sale Boys, county teams, then Sunday League. I broke my leg when I was 19 or 20, missed a year, then when I came back I’d lost a bit of pace and had to reinvent myself as a left winger. I’d been at United for 12 years on the groundstaff when I started doing the kits, which meant my football took a back seat.

Once you join the kit department at this club, you’re in constantly and working every weekend, so I just didn’t have time to keep playing. I was turning up once every five weeks, which wasn’t fair on my team, so I had to just pack it in.

I was with the Reserves for a pre-season friendly. The A and B team were both away playing games, the Reserves had a game and the first team had a game, all on the same day, so numbers were stretched to get teams out. We turned up at Prestatyn Town with 11 men. At the time we had Jim Ryan as manager, Rob Swire as physio and me – that was the staff on that trip. Us and the team.

Jim said to me: “Just put a kit on. Just in case. We won’t need you, but just in case anybody gets injured.”

I was 29 at the time, so I was still fit enough to play, but after Jim said that, I was a nervous wreck all day. I put the kit on, put my tracksuit back on over it and I was sat on the bench. It didn’t help that it was a boiling hot day as well. I was absolutely roasting all game.

We had a lad called Ross Millard playing centre-half at the time and the previous year, he’d had a back operation which had been make-or-break for him. He’d had all sorts of issues with his lower back, so this was his comeback game and it was pretty much the last chance for him to prove to himself that the operation had been a success and he could start playing properly again.

Around 20 minutes from time, Ross signalled over to the bench.

His back had gone again.

"Jim said to me: “Just put a kit on. Just in case. We won’t need you, but just in case anybody gets injured.”

My first reaction was that it was such a shame for Ross. It was huge for him to be back playing again, but he’d broken down in the first game.

Then, Jim turned to me and said: “You’d better get warmed up.”

So my second reaction was to just think: Oh. My. God.

It was one of those pitches with just a small fence around it, plus a couple of thousand fans in attendance, and I just started running up and down alongside them.

“Jim, I can’t play centre-half.” Honestly, I couldn’t defend for toffee. Like I said, I’d always been a striker so he had to put my on in my best position, surely.

So Jim shuffled the team around, ended up moving Terry Cooke into midfield and he said to me: “Just go up front. You’ll be fine.”

So that was me for the last 15 minutes. What surprised me was that, as soon as I got on the pitch, I went into game mode. I completely forgot where I was, who I was playing for… I just played. Because it was so late in the game and it was such a hot day, everyone was tiring so I was able to slot in and not be too far out of my depth.

I really only properly remember three things happening in those 15 minutes. One was playing a one-two with Terry Cooke on the edge of the box. Another one, I put a cross in for Michael Twiss and he hit the bar.

The third one was scoring.

Ryan Ford was in midfield and he hit a 25-yard shot which the keeper did brilliantly to save, to be fair to him, but I just reacted straight away. As soon as the shot was hit, I knew to run in in case I could follow up. The keeper parried it out, I ran in and smashed the ball in from about six yards out.

I think we won 5-0 and that was the final goal. It was also the only goal the team celebrated all day. The players went bananas for me. The crowd must have been wondering what was going on. Why are they all going mad celebrating that one?

It felt so surreal. In the space of a few minutes I’d gone from being a nervous wreck to being calm and focused to suddenly having this elation that I’d scored. It’s just bizarre. It may only a pre-season friendly at Prestatyn for the Reserves, but you’re still wearing a United shirt and celebrating a goal that you’ve just scored.

Cliff Butler, who’s now the club statistician, was with us that day and he put a story in the Football Pink about it the next day. My mam’s still got it at home. The whole thing was mad.

I suppose it was even madder when I did it again a few years later!

The same thing happened again because we had teams out everywhere. Mike Phelan was in charge of the Reserves because Jim was up working with the first team by that stage, and we had two or three games up in Scotland. We lost a couple of players to injury in the first game – not bad ones, but just people not being fully fit to play a few days later – and in the second game we played Selkirk FC from the Lowland League.

We’d only taken 14 players in total and after one game, we were down to 11 men. Me and the physio Neil Hough both had kit on underneath our tracksuits on the bench. We were winning 5-0 with around 15 minutes to go again, and this time Mick turned to me and said: “Do you want to go on?”

"I don’t think the opposition were very happy to see the physio and the kitman coming on and the whole team celebrating one of them scoring."

So he took off Ben Muirhead, who had a slight injury from the first game, I went on and about two minutes later Danny Pugh went down injured. Neil ran on to treat him, then had to bring Danny off before getting changed and going on himself to replace him!

We were only on the pitch together for about 10 minutes, but we made the most of the time. About a minute after he came on, Neil crossed the ball for me, I brought it down, had a shot and the ball deflected into the net. The two substitutes combined for a late goal; it was just like the Nou Camp all over again – maybe that’s why Maysie ran the length of the field to celebrate with us.

I don’t think the opposition were very happy to see the physio and the kitman coming on and the whole team celebrating one of them scoring. I think they thought we were taking the p*** out of them, but it really was a case of needs must. Mick Phelan had to explain to them that we literally didn’t have any other players because the first team had started their proper season two days earlier. They were alright about it afterwards, but I think it just stung them at the time to see even the staff scoring.

"What surprised me was that, as soon as I got on the pitch, I went into game mode. I completely forgot where I was, who I was playing for… I just played."

In fairness, the standard among the staff at United as players has always been decent. We used to have a staff team and we’d play against City’s staff or the Coronation Street all-stars. I was always invited to play in those games at the Cliff or the Aon Training Complex. We’d also play 7-a-side cage games between ourselves which were always very competitive and there was a lot of good players.

You just don’t get time for that kind of thing now. We had a decent staff team, but since the Academy took off the job became more time-consuming and there was just no time for it. We had to take on an assistant in the kit department, Ian Buckingham, and – as ridiculous as it sounds - he ended up doing exactly what I did!

He did it a few years later at a pre-season tournament under Ole when he was Reserves manager. Bucks ended up on the bench and again there were injuries, it was final group game when we’d already qualified, so Ole asked Ian if he wanted to go on for five minutes. He did, they got a penalty and Ian scored it, so while I’m happy with my ratio of two goals in half an hour of football, Bucks has a ratio of a goal every five minutes. Not bad, is it?

It’s the sort of thing that just wouldn’t be allowed to happen now, I’m sure, and I can’t imagine a situation where we’d ever be short on players again. The squads are all huge, so the pool of players at our disposal is absolutely enormous.

If Woody ever told me the U23s were short on numbers, I’d definitely answer the call, just to help out (and see if I could add to my tally), but I don’t think it’ll come. I’ve come to terms with the fact that my playing days are over. I’ve been at the club for nearly 30 years now and seen a lot of highlights, a lot of success and made some great memories. When I sit back and think about them all, it’s definitely hard to beat the fact that I’ve scored for United.

De Gea: He's a big weapon for us