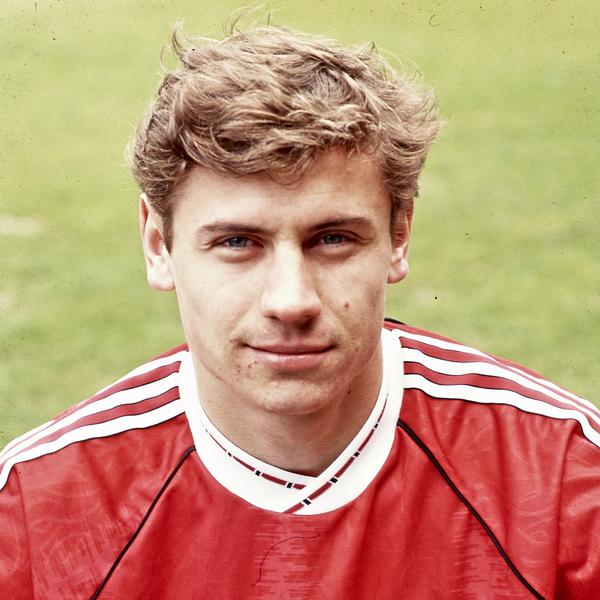 The Manchester United team we had in 1994 was unbelievable. It was just something different.

I loved playing in that United team. We had great players, great staff, like a fantastic family. With all the new players who came in: Eric, Andy Cole, Roy Keane, the young players like Gary Neville, it never caused any problem for the team.

I believe that, without UEFA’s rules around foreign players, we could have won the Champions League. I remember we went to Barcelona and had Peter Schmeichel and Eric Cantona up in the stands. The manager had big decisions to make because Ryan Giggs, Denis Irwin, Roy Keane, Mark Hughes… they were all foreigners under those rules. So was I, of course. If we had been allowed to select the teams we had in the Premier League, I am sure we could have reached the final in 1994/95.

Instead, obviously a lot of people remember that night in the Nou Camp being a very bad night for us. We had played them at Old Trafford and we drew 2-2 in a very good game, but this was a very special Barcelona team. Koeman, Romario, Stoichkov and more, and we were without Cantona and Schmeichel . We never lost games badly, but we lost 4-0 that night. We had a great atmosphere in the group, great lads in that squad and I’ll say it again: if we had our full strength team out in Barcelona, we would not have lost 4-0. They would have found it very difficult to beat us. After that game, Sir Alex, the big boss, said to us: “That’s life. It’s a bad result, but we have a big game against Aston Villa now which we need to win. Life goes on.”

A few days later we went to Villa Park and played a very nice game against Villa. We won 2-1, I scored our second goal and we played very well. Villa were a good team, but we were very strong in the Premier League. We had won the last two titles and we wanted three in a row.

“Without the foreign player rule, we could have won the Champions League.”

Barcelona was in the past, we had a great result against Villa and then we had the Manchester derby to look forward to next. In some ways the fixture was different back then to how it is now, because City weren’t as good as they are now, but a derby game is a derby game and that is the same all over the world. I remember when I was at Glasgow Rangers, fans were saying to me that if we won four games against Celtic during a season then it had been a good season. Never mind what position we are in the table, just win those games.

Before the Manchester derby in November 1994, I remember it was the first time with Sir Alex that we went to the hotel before the game to prepare. Before, we had always stayed at home during the day and then we went to Old Trafford for a little bit of food and to look forward to the game. Now, against Man City, he made us understand: it didn’t matter what position City were in the table. This was a derby. A big game. They would have a lot of determination to win the game and the big boss understood that, so he made sure we were prepared.

Normally we would play a derby game at the weekend, but this one was on a Thursday night. Today, with no supporters in the stadiums because of the virus, games feel like friendly games. I have felt that while managing during these games in Uzbekistan. But back then, especially on that night against City, the atmosphere was amazing. Everybody inside the stadium understood the fixture and its importance, and fans from both clubs wanted their players to go out and fight for the win and kill the other team. It made the game even more important for the players.

Then we scored our first goal. I had the ball on the right, I looked up and saw Eric with some space in front of him, so I did the obvious thing and passed the ball to him. Eric was great. He was special, different, unbelievable. He played for other clubs before he came to England, he played for one season at Leeds, but for me he is a Manchester United player. Not a France player, not a player for any other club, just a United player. He was so special for United. His first touch was always perfect, and that night he brought down my pass with his right foot perfectly. His second touch was great too: he smashed it into the net for a great goal and thanked me for the assist.

Next, he assisted me for our second goal. That was an even better way of saying thank you! He passed it to me inside the City area, I tried to hit the ball diagonally across goal but my shot had a bit of a deflection, tricked the goalkeeper and rolled into the net at the near post. It didn’t matter where it went in or that I was a little bit lucky because sometimes in games, in life, you need a little bit of luck. It was so important for me, for the team and also for the game because City stopped playing at that point. When the score went to 2-0 just before half-time, that was the end of the game.

In the dressing room, the big boss made sure we kept going. He told us: “No relaxing, be more aggressive, we play for the fans.” That’s what we did in the second half and we really enjoyed ourselves. No problems, no players annoyed with anything, we just knew we were playing well in a big game with our rivals and so we enjoyed it.

Early in the second half, I scored again. This time, my first shot was saved, but the ball came back to me and I put it in the empty net. Maybe a little bit lucky again, but sometimes you have those nights where everything seems to work for you. The same happened with our fourth goal - Roy Keane went on an excellent run on the right side, crossed in for Mark Hughes and his shot was blocked but he just scored with his second shot. It all happened so quickly, it was what I would call a typical United goal at that time: it was all happening so fast that other teams couldn’t stop it.

“Eric was so special for United.”

We kept enjoying ourselves and kept going forward because we always wanted more goals. In the last minute, I got another one for my hat-trick; a very special moment in my career.

I am a coach these days, so I should show videos of this goal to the players I work with! I would show them the things I showed in that goal: determination to score, running hard even in the last minute of the game, and just being sure that I was ready at every moment of the game. If you train hard every day, stay fit, enjoy your football and try hard, then you will have no problems in the game. When Eric got the ball on the right-hand side, I saw the space in front of me and just started running. It didn’t matter that it was the last minute, I just wanted to score. The big boss was always telling us to get goals, goals, goals, so I wanted another one.

Eric gave me a perfect pass, putting me against just the goalkeeper. Every time I look back at this goal, I see a bad first shot. I was not a forward. I was not Alan Shearer or Wayne Rooney, scoring hundreds of goals. I was a right winger and you could see that with my first shot, but again, I had some luck with the ball coming back to me and I scored with the rebound.

It was a very good night for me, a very special night for the fans as well – they were very, very happy! Everybody was telling me congratulations. We got five goals, three points, I remember being told to go and do the TV interview after the match. I don’t think it was a great interview, I just said it was a difficult game and blah, blah, blah… I was thinking about other things!

“I was able to play with fantastic players in teams that I loved.”

I got to keep the ball from that match because of my hat-trick, and I still have it in my house. I have lots of things from my time at United. My medals, my caps, my photos… big photos of the teams I played in, a big photo with Matt Busby which was very nice, so I have lots of big, nice memories from my career at Old Trafford.

There are so many highlights. I always look back on my first goal for United against Sheffield United, winning the man-of-the-match award in my first home game against Notts County in front of 40,000 people, and scoring three goals in the derby was special of course. I am very proud that I scored in the Manchester derby, Merseyside derby and the Glasgow derby during my career – I think I am still the only player to do that.

It was all special, all my time at United. We won titles, lost titles, played great games, I was able to play with fantastic players in teams that I loved. I am still very grateful and very thankful for that.