UTD Unscripted: Growing up in paradise 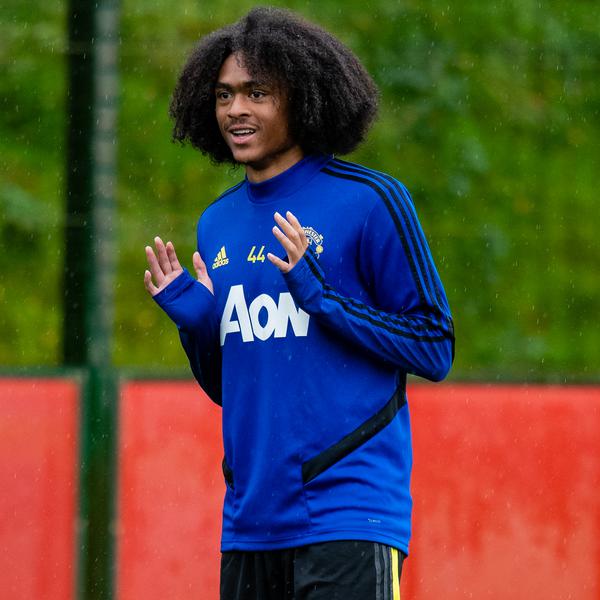 I still remember the first time I ever played football. It was a training session with Excellence, my nearest team in Curacao. I was six years old.

I hadn’t had any interest in football until the 2006 World Cup final. Literally none at all.

My dad was a footballer in Curacao and he would say to me: “I’m playing today. Do you want to come to the game and watch me?

“Why would I go to a football match? It’s not for me.” I just couldn’t find anything in it.

Then the World Cup came about. France played Italy in the final and it was one of the first times I had ever watched a game. The World Cup is just so big that everyone watches it. You would go to a house and everybody sits in front of the TV to watch it.

So I was like, okay, everyone is talking about it so I will watch it. They must all be talking about it for a reason. Dad, being a football man, was watching it and I sat there watching it too. And I was supporting France, for some reason, I don’t know why. I didn’t even know the rules. I didn’t know anything about it. I was supporting France and that was where it all started. I was rooting for them so I was crying afterwards when they lost. Things changed for me, after that.
Tahith Chong says

"I was supporting France [in the 2006 World Cup final] and that was where it all started. I was rooting for them so I was crying afterwards when they lost."

I went to my dad and said: “I want to start playing football.”

I’d always said I didn’t like it so he felt there was no point. But for months I kept telling him I wanted to play football and my mum eventually said it’s time to let him go and see how he does. Just for fun.

So I went along to Excellence, started my first session and I wouldn’t say I was standing out above all the other kids, honestly, but I could see I was okay. Afterwards, the first thing the coach asked my dad was: “How long has he been playing football?”

The coach thought he was joking.

That’s when I got started. I was hooked. I started watching every game, every day.
But let me explain what Curacao is like.

Every day is warm and the weather is simply amazing. There is the beach and the sea. You know, when you walk in it, you can still see your toes. We’ve got loads of beaches. I appreciate them so much more now than when I was actually there.

I lived quite close to Willemstad, the capital city, not even five minutes away. But, then again, everything in Curacao is quite close. I think the furthest point from one place to another is probably a 45-minute drive.

Willemstad attracts more visitors as it's the capital and it’s very beautiful. There are these houses of all different colours which are popular with the tourists but there are other spots people do not know about and so many other places to go and see.

Tourism is a big industry for the island and a lot of people go there on cruises so you can see these big ships coming in from a long way out.
Tahith Chong says

"Every day is warm and the weather is simply amazing. There is the beach and the sea. You know, when you walk in it, you can still see your toes."

Most of the people back home speak our native language. It’s a mixture of Dutch, Spanish and Portuguese words, sometimes even English. You know, sometimes I call my mum and speak it and Angel Gomes and some of the Spanish boys can understand what I am saying to her.

The food is quite similar to Caribbean cuisine and every place has got that different taste. It’s very fresh. Everything is made at that point – they actually go and fish and then cook it fresh.

Football is really big over in Curacao. Even though it’s a small country, everything is about football and baseball. There are lots of players from Curacao in Major League Baseball so it’s big, people like Kenley Jansen and Andruw Jones. Footballers such as Jetro Willens and Leroy Fer are from there.

Obviously, America is not far – two hours away – so we have a lot of players going to the States to play in Major League Soccer.

Also a lot of footballers who play for Holland are actually from Curacao, or, at least, their parents are. The island used to be a Dutch colony so everyone had their passports, which is why I play for Holland.

When we realised that I liked football and could play, he came into training every day with me. He was a winger as well and he definitely helped teach me a lot of things that would help my game. For me, I just enjoyed learning new stuff about football. I couldn’t get enough of it.

I am still like that now. Even when we travel with the first team, I am on the phone, with Sky Go, watching the games. I always enjoy watching football matches to see what is going on. Every game that is on, I will watch it.

When I was young, it helped that on a typical school day, your classes would finish around midday and you’d be done for the day. I would go back and do my homework. Quick, quick, quick. Then I could go out into the back garden to play football.

Just me, by myself, pretending to be players and saying things like: “It’s Giggs on the ball.” I loved it.
Tahith Chong says

"Every step of the way, my dad has been there with me. That’s still the case now that I’m at United."

There were loads of big players at the time but Giggsy was definitely the one who comes to mind straight away. It was just a fun thing to do as a kid. I would see them on the TV and try to copy their skills. It was really cool.

Of course, I watched United. They’re a big club and the big games would be on TV. It’s crazy to think back, in the day, when I was playing on the Xbox and I would pick United a lot of the time. They had Ronaldo and Rooney. A good team. I’d create myself as a player, bring myself on and that is just crazy when I think about it now.

Also, everyone, close to home, would come together to play football and, at the end of the day, I got to train as well. In the space of a couple of years, my life had become just pure football and that was really it.

My dad’s cousin was friends with John De Wolf, who played at Feyenoord (he’s now their assistant manager, actually). So we had a connection there and when I was eight years old, he set up a trial for me in Holland.

At that time, I didn’t know much about Holland at all. I had a couple of months on trial and then they said they were taking me. I wanted to go back home to finish school first so I went back to Curacao and did that. After that, my parents left everything behind – their work and everything – to go and live in Holland.

At the time, I was just excited to be going to a different country. Curacao is just a small island and then you go into Europe and Holland was a big country.

Have I mentioned I wasn’t used to the cold either?
Tahith Chong says

"I admit I still feel like a free spirit in my game. It is really always going to be there but I try to do it in a correct way and within the correct system."

I played in Rotterdam but went to school and lived in Den Haag. It’s about 15-20 minutes away and, every day, I would go on the Metro. I remember every day, being on that Metro to Rotterdam.

The first year was training. Board the train, then the bus would pick us up at Rotterdam station and take us to training. Afterwards, I would get a shower and I’d go to school for the rest of the day, so it was full on. I was mixed in with everyone but the school was only for sports people. It was like an academy for football, tennis and everything.

It was so different, even the positioning on the pitch and all the stuff that you had to learn about where to go. Feyenoord really helped me.

Obviously, I was used to being freer and just running about in Curacao. But it was different at Feyenoord. Everything was different. I was looking around a bit to see what I could learn. I just wanted the ball to go and beat players. It was the only thing I knew.

Over time, I learned the other stuff on the pitch and it helped me enormously with my game, just to have that understanding of it. I admit I still feel like a free spirit in my game. It is really always going to be there but I try to do it in a correct way and within the correct system.

Every step of the way, my dad has been there with me. That’s still the case now that I’m at United. I’ve been here for over three years now and he hasn’t missed a single game I’ve played. As I got a bit older, he became more critical of me. Most of the time, I am more critical. I am very self-critical of my performances.

It’s just about growing up. My dad doesn’t say that much now. He just gives me advice. I have got to keep the standards high for myself. I think he is proud of me, though.

When we do get time and we go back to where it all started, compared to where I am now… I know there is still a lot of work for me to do but he can definitely be proud of me.

They are definitely proud of me back in Curacao. Everyone there is basically supporting United. The whole of the island, probably because of me, are following everything to do with us and it’s really cool to see every time I go home.

I go back every summer, see the same people there every year and it’s still the same place really. Bits change, but it’s still my paradise home. For everyone from Holland, their first destination is Curacao. I was surprised in England that not a lot of people are aware of it because everyone in Holland knows it!

That might change here in England. I’ve started to tell some of the boys and even the United staff about it. We’ve got the beaches, of course, the fishing is great, the scuba diving is scary but fun and there’s a lot for the boys to see and do. Maybe in a couple of years some of them will head over for their holidays.

Solskjaer highlights how United must improve