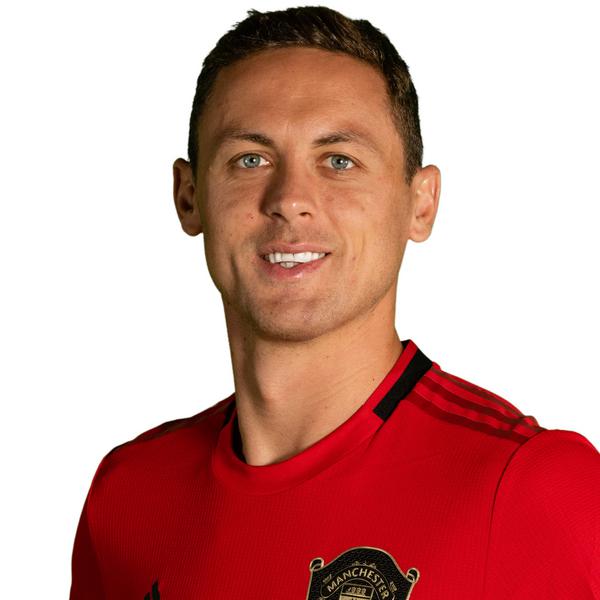 You watch the ball go over the fence and all the kids just stop. You look at each other. There’s only one thing you can do: rock, paper, scissors.

That’s the only way to decide who gets the ball as nobody wants to get it.

No kid wants to climb into a cemetery, do they?

That was the first football pitch I ever played on, in my home village of Ub in Serbia. A dirt patch next to a cemetery. And I mean right next to it. There was no grass at all, so the surface was either too wet or too dry, depending on whether it was raining or not. It was absolutely terrible. But it teaches you lessons too. You have to expect anything. When you pass the ball to another kid, he cannot put his foot where the ball is going to be and then look where he is going to pass it, before the ball has come; you have to move to the ball all the time because you never know when it is going to bounce away from you.

We lived in a small village with maybe 1,500 people living there at the time. I had a lot of friends and life was all about playing football – no matter how bad the pitch was – so you just play and play. When you go home to your parents, they can only see your eyes because the rest of you is covered in dirt.

That was just life, though. I loved it.

"You watch the ball go over the fence and all the kids just stop. You look at each other. There’s only one thing you can do: rock, paper, scissors. No kid wants to climb into a cemetery, do they?"

It was a nightmare. It was always hard. Even when I scored five goals in one game, he said I had played badly! He always finds something, whether it was a pass I didn’t make or whatever. For the other kids it was ok, but for me it was a nightmare. Even with my brother he wasn’t so bad, but from me he always wanted more. Always.

There’s been one time in my life when he told me I had a good game! I remember it, of course. It was the semi-final of the Europa League, Benfica against Fenerbahce, and after that he said: you played a good game. This was the first time, and the last time too!

I always wondered why he was so demanding of me, but when I look back at it now, of course I see why he said it and realise it was good for me in the long-term. As a seven-year-old, though, I hated having him as my coach.
Still, I preferred football to school. Don’t get me wrong, I liked school because I could see all my friends but, when I had to read a book, my mind would be wandering to playing football or basketball. I wasn’t the best in my class, but I was good enough to get by while I spent my time thinking about playing sports.

When we weren’t in school, during the summer holidays, we didn’t have enough money to go anywhere else. But that was no issue. At that time I wasn’t even thinking about holidays. My country was in a difficult situation economically, but I was happy with what I had. In the summer I had time to play sports – football, basketball, volleyball – so we would spend ages organising tournaments with kids from other parts of the village or even other villages. All summer long, we had tournaments.

Let me tell you, when kids from another area came to our village to play, those games were huge. There may have been no supporters watching the game, but in our heads it was the same atmosphere as when Red Star plays Partizan in the Belgrade derby. We had to win. This was our pride. We played for our village. It was not allowed – no, not possible – for another team to come to our village and win!

When I was 10, a coach from one of the bigger clubs close to my home, about a 30-minute ride away, saw me playing at one of those tournaments. After the game, he come over to me and asked me how old I was. I told him that I was born in 1988.

“Pah. You don’t even know what age you are.”

He didn’t believe me. The way I had played, he thought I was much older. He genuinely went and found some people who knew my father, got the phone number for our house, and he asked my father when I was born.

The guy was a coach at one of the best youth clubs in Yugoslavia, so he told my father that I should be given to them to play in a tournament that was coming up, where the best 16 clubs in the country would be playing.

My father said ok and I went. We won the tournament, we were named the best youth team in Yugoslavia and I won the Player of the Tournament award. After that, both Red Star and Partizan asked me to go and play for them.

I chose Red Star, I spent four years there, then they told me I wasn’t good enough and I was free to leave. Because I was already in Belgrade and settled at school, I had to find another club in the area. Partizan heard I was free and the coach asked me to go there, so I went from Red Star to Partizan.

I was there one year and they told me I wasn’t good enough!

When you keep getting told you’re not good enough, what else can you do? You prove everyone wrong.

So I went back home to my first club, I spent some time there and then when I was 18, I moved to the Serbian third division. I spent six months there and went to the Slovakian first division with FC Kosice. After two-and-a-half years I went to Chelsea, then Benfica, back to Chelsea, then to Manchester United.

A lot of that is thanks to my mother. She always wanted my school to come first and she was not happy that I preferred to play sports. I remember when I first joined a club and had to go to training, I told my teacher that I would have to miss some classes so that I could travel to play football.

The teacher almost laughed, and said: “Ok, but your parents have to tell me this because you’re just a kid!” That wasn’t an easy conversation, telling my mother that she had to go into school to tell my teacher that I would be missing classes to play football. She almost cried, actually, but even though it was a hard decision, she did it for me.

Thanks to that, I have had the career I have had.
UTD Unscripted
Nemanja Matic says

"I love going back to Serbia, but I have to admit that there is one thing I still find strange: they have named a street after me in Ub. When I first heard about it was like: 'Okayyyyy'!"

Before this season started, I spent almost the entire summer back home in Ub. It was the longest holiday I have ever had in my life. The best thing about Ub is the people. When we go on tour, to Singapore, China and other places, the people don’t have chances to see us that often, so it is a surprise for them to see you in person. When I go home to Serbia, people are just like: ‘Hi Nemanja, how are you?’ It’s normal and that makes me happy. I have my routine there. Wake up in the morning, go to the swimming pool with the kids, lunch, in the afternoon my son is playing football with his friends and I sit with my wife in the restaurant next to the playground where they play, and people know that I’m there. I’m just normal like everyone else.

I still have so many friends from my childhood there, which is how we ended up forming a football club of our own. One evening we were just sitting down eating dinner together and we decided: ‘Let’s make our club and start from the bottom,’ like Sunday League. In the first two seasons we won all our games, winning 47 official games in a row, so we’ve been promoted three times and we are now in the fourth division, like the equivalent of League Two. Last year we finished eighth, middle of the table, so now we will see how we get on.

WATCH IN OUR APP

We are a small club, and you tend to find that Serbian people like to support the foreign clubs where Serbian players play, of course. That’s why a lot of Serbian people support United; not just because of me, but because of Nemanja Vidic. They support Chelsea because of me and Branislav Ivanovic, Inter Milan because of Dejan Stankovic when he played there and so on. When I was a kid I was the same; I always supported clubs where players from the national team played. In Serbia I supported Red Star Belgrade, but outside Serbia I supported Valencia because my father’s friend, Miroslav Dukic, played for them. His son now lives in Manchester and he’s a good friend of mine. It’s a small world, isn’t it!

I love going back to Serbia, but I have to admit that there is one thing I still find strange: they have named a street after me in Ub. When I first heard about it was like: “Okayyyyy,” and when I first drove through the city for the first time and saw the road, it was strange. I don’t understand it still.

Maybe in 20 or 30 years I will look back and think: ‘Ok, I did something good,’ but for now it is still strange. It is nice, of course, and it does make me proud that the people of the town think I have done something good.

I guess I have come a long way since I used to climb over the cemetery fence!