UTD Unscripted: My day as the gaffer 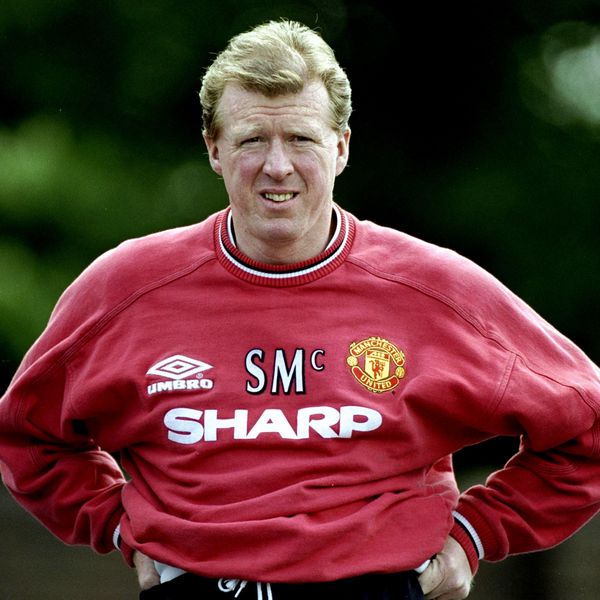 We were a few weeks into the 2000/01 season when we ran into a bit of an issue with the fixtures calendar.

Our trip to Maine Road had been rearranged for 11.30am on Saturday, 18 November. It would have been televised anyway, I’m certain, but it was an especially interesting fixture as there hadn’t been a Manchester derby in the previous four seasons, since City had been playing in the lower divisions, so Sky Sports were always going to show it.

We just had one small issue.

The gaffer was going to be in South Africa.

His son, Jason, had booked his wedding for that particular weekend because, at the time he booked it, it was scheduled to be an international break, so his dad had a gap in his calendar. Instead, the international friendlies were brought forward to the previous midweek and the domestic calendar carried on across that weekend.

When Alex realised what was happening, it forced him to choose between football and the family and, quite rightly, the family won. He had so many strengths, but one of his biggest was his trust in his staff. I’m not sure too many managers would have left their assistant in charge, particularly for a game of that magnitude, but when we sat down for a conversation a few weeks before the game, it was all very matter-of-fact.

“You’ll be taking the game.”

Simple as that. Then he wrote down the team.

“There’s the team. Those boys will look after it. Don’t worry.”

“He [Sir Alex] had so many strengths, but one of his biggest was his trust in his staff. I’m not sure too many managers would have left their assistant in charge, particularly for a game of that magnitude.”

He picked a team that was almost all local boys, apart from Teddy, Yorkie and Barthez. Everyone else knew what the Manchester derby was all about. Even though City were only just coming back up and it was an absolutely massive game for them, the boys all knew how big it was for us too.

The gaffer didn’t sit down and discuss it at length; he didn’t burden me with too many instructions. He just told me I’d be in charge, told me the team at the time and then the rest of the build-up was very straightforward – maybe apart from factoring in pre-match meals at 8.30am for such an early kick-off. Knowing what was happening so early was a bonus in many ways, but it also gave me a good few weeks of sleepless nights!

Fortunately, I also had England to take my focus for a while. In that midweek international break before the derby, I was part of the England coaching setup for the first time, under Peter Taylor, and my first trip away was a friendly against Italy in Turin.

I had a few of the United lads for company: David Beckham, Nicky Butt and the Nevilles were in that squad. Becks was England captain for the first time that night, and at that time he really was near his very best. He was capable of taking any game by the scruff of the neck. His overall game, his temperament, his prowess at dead ball situations, his energy… he could win any game for you. Off the pitch, he was quiet but he lifted the players around him, plus it was a young squad, hence Peter giving him the captaincy.

When we got back to Manchester, there was a huge circus around the derby. The media was all over it. That meant there was a lot of pressure on me. Thankfully – in some ways – I’d had some experience of being in charge of the team before.

The manager had sat out the pre-season tour of Australia and the Far East in the summer of 1999, just after we’d won the Treble, and we had three or four games out there. Jimmy Ryan and I took that whole pre-season, really, and that was still only a few months after I’d joined the club. Obviously winning the Treble had helped give me the confidence and self-belief that I could do it, plus – most importantly – it had earned the trust of the players.

But, without the gaffer there, let’s just say they were a hard bunch to control.

A lot of the players were still high from the Treble, the summer and they were in celebratory mood. It was my first pre-season trip, and I was learning on the job. It was a gruelling trip: Australia, China, Hong Kong, with the heat, the travel, the time difference… it was a test and it was difficult. Some stories from that trip can’t be repeated here… let’s put it this way: it would have been totally different with the gaffer there.

This time around, it wasn’t pre-season. It was a derby. It was a hugely important game and there was no messing about. Personally, I felt absolutely enormous pressure. Huge responsibility. It was my first proper taste of being on the touchline and being the man at the front.

I was lucky because I had instructions, I had the team picked and the team that was picked knew how to win the game, but I still had decisions to make. You get in the dressing room before the game and you’re not Alex Ferguson. You’re you. You know that. The players know that. It’s your message, you’ve got to be yourself, you can’t give the hairdryer like he can, but the most important thing was the team. That was a team of winners. They knew how to win that game and they didn’t need a lot from me.

“Personally, I felt absolutely enormous pressure. Huge responsibility. It was my first proper taste of being on the touchline and being the man at the front.”

I just focused my team-talk on what I thought needed addressing. It was all about controlling the emotion, focusing on the game and not the circus which was surrounding the first derby in many years. The media had been really building it up, part of which was an awful lot of talk around Roy Keane and Alf Inge Haaland, so one of my concerns was Roy’s emotional control because there was obviously some previous between them already – and of course there was more to come in the derby at Old Trafford later that season. You don’t tend to win any game, let alone a big derby, with 10 men, so it was key for us that we kept our emotions in control, and that was the main theme of what I said before the game.

Keep a lid on your emotions.

Keep 11 players on the park.

Off they went and, overall, that’s what happened. We started off well – probably a little too well, looking back. You can score too early and it’s possible that we did that when Becks scored a brilliant free-kick in the second minute.

Talk about making your quality count. What a goal that was, a goal to win a derby game. Like I said, Becks was capable of winning any game for you, even from 30 yards out with a wall of players in front of him.

I still remember the atmosphere now. City fans were absolutely desperate to beat United, and our fans were in equally vocal mood. Despite all that, like a lot of derbies, the game wasn’t a great spectacle.

We got to half-time at 1-0 and, when we got to the dressing room, our kitman, Albert Morgan, already had a text message from the gaffer. Sure enough, he was watching the game over in South Africa, and the message to Albert was clear: make sure I told Yorkie just to pull his finger out a bit more. Well, words to that effect, and not quite so politely. Even from afar, the hairdryer was there, even if I toned it down to level one, rather than level five.

The gaffer was watching intently, without a doubt. We all felt his presence. He may have been in a different hemisphere, however many miles away, but he was always there. That’s the aura that he’s got; the aura that he had created over many years. He may not have been in the dressing room that day, but everybody knew he’d be over there watching the game and there would be repercussions when he got back if they didn’t produce.

Video
Becks' strike at Maine Road features at no.3 in our all-time top 10 of his United free-kicks.
Anyway, Yorkie had a better second half.

Overall, it still wasn’t a great game after the break. City gave us a couple of scares, especially one late on where Wes had to clear the ball off the line, but there were also a few opportunities to score more ourselves which we didn’t take. Overall it was closer than it should have been, but Becks’ free-kick ended up being the difference.

Before I’d even done my post-match interview, a message came through to Albert: the gaffer was thrilled that he could open the champagne and go and enjoy his son’s wedding.

The players didn’t overly celebrate afterwards. They never got too emotional about games, never got too high. It was big and they knew it, but they were all professional, so there wasn’t a big, emotional celebration afterwards. For them, it was just job done, move on.

For me, it was job done, sheer, massive relief, a glass of red wine and finally I could sleep again!

“What a goal that was, a goal to win a derby game. Like I said, Becks was capable of winning any game for you, even from 30 yards out with a wall of players in front of him.”