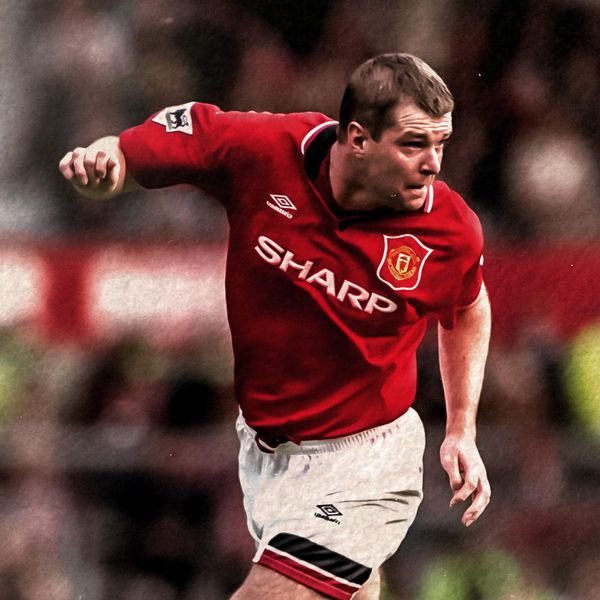 A pacy defender with excellent aerial ability and terrific ball control given his towering 6ft 4in frame, Gary Pallister formed half of arguably the greatest central defensive partnership the club has known.

With Steve Bruce by his side ‘Dolly and Daisy’, as they were affectionately dubbed, saw off all comers to United’s 18-yard box in a glorious seven-season stint together.

Born on the Kent coast in Ramsgate in June 1965, Pallister started his career with non-league Billingham Town and joined the Reds from his boyhood heroes Middlesbrough for £2.3 million in August 1989 – then a record fee for a British defender.

Given a weight-training regime to bulk up his skinny body, the 13th-placed finish of his first season was followed by a remarkable run in which United finished outside the top two just once in the next eight campaigns.

An imposing backline, in which Pallister was a permanent fixture (he missed just one league game between 1992 and 1995), proved a cornerstone of this success. He was voted PFA Player of the Year in 1992 and was unlucky not to win more than 22 England caps.

After nine years at Old Trafford and 317 league appearances – and a further title success in 1996/97 following Bruce’s departure – Pallister’s career went full circle, leaving United to return to the north-east with Premiership new boys Boro for £2.5 million in the summer of 1998. All that success, and a £200,000 profit!

Pallister is still a regular face at Old Trafford, occasionally popping up on MUTV as a pundit. And though stopping goals is the thing he will be largely remembered for, his brace of headers against Liverpool at Anfield, to all but clinch the 1997 title, burns brightly in any self-suspecting Red’s memory bank.

Harry Maguire is determined to emulate Gary Pallister's feat despite the hectic schedule over the next month or so.

Bryan Robson, Gary Pallister and Steve Coppell recall the most physical of contests, when United won the FA Cup in 1990.

Pally netted this special strike in 1993, on a night to remember at Old Trafford...

Five former players have joined club staff in calling senior members of our fanbase in lockdown.

Negotiations for the purchase of the centre-back went on until the early hours of the morning back in 1989.

Harry Maguire and Victor Lindelof are on track to continue keeping things tight at the back for United.

In the latest episode, Gary recalls adapting to life at United and working on his partnership with Steve Bruce.

UTD Podcast: Why Pally was told off at Anfield video

In the latest UTD Podcast, Pally reveals why Alex Ferguson gave him a dressing down after his brace at Anfield…

Make sure you watch Legends Tonight on MUTV from 18:30 GMT on Thursday! Gary recalls THAT famous phone-in...

In MUTV's new episode of Legends Tonight, Gary Pallister tells a brilliant story about a surprise visit from Sir Alex...

Happy birthday, Gary Pallister! We'll always remember these two goals he scored in a 3-1 win at Anfield, back in 1997...

'The lads who came in stepped up' video

What did the MUTV pundits make of our impressive victory at Stamford Bridge? Here's Wes Brown and Gary Pallister...