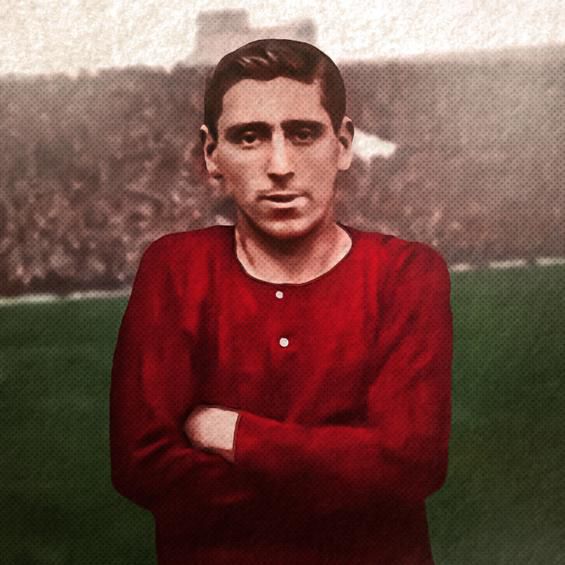 Ryan Giggs patrolled the left flank for United for more than two decades, but a century ago that was George Wall’s job.

The Geordie was the outstanding left winger in the club’s first great era and accrued four medals in a ten-year career with United, before World War I disrupted his career.

Wall played for a number of clubs in his native North-East before getting his big break with Second Division side Barnsley. His performances caught the eye of United scouts and in April 1906 Wall moved from Yorkshire to Lancashire.

At that time United were in the running for promotion to the Football League’s top flight and Wall’s craft, guile and goals secured second spot and guaranteed promotion. His debut goal against Clapton Orient gave United fans a taste of things to come.

The 1906/07 season saw Wall make the left-wing spot in the team his own, not missing a single game and ending the campaign as the club’s top scorer with 11 goals.

He improved even further the following year, missing just two games and scoring a remarkable 19 goals as United won the First Division for the first time. He was on the scoresheet in the first ever Charity Shield match as United crushed Queen’s Park Rangers 4-0.

The following season saw a dip in the club’s league form but memorably provided an FA Cup winners’ medal for Wall. He was also part of the team that won the league for the second time in 1911 and continued at United for four more years before the First World War brought an end to his United career.

It wasn’t to herald the end of his football career though. After the War, Wall signed for Oldham and went on to play for four more clubs before bringing his career to a close back in Manchester in 1927, playing for Manchester Ship Canal FC.