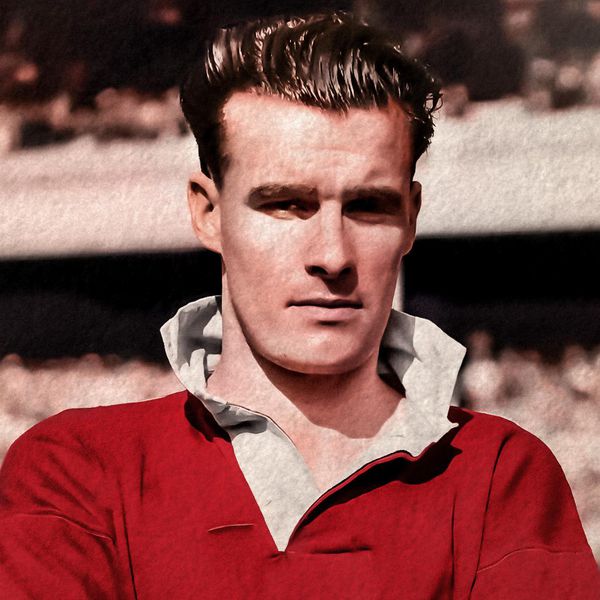 Though the war played havoc with his United career, Stan Pearson’s talents at inside-forward made him one of the brightest stars in the club's firmament when hostilities ceased.

A Salford boy, born on 11 January 1919, he was spotted playing for Adelphi Lads’ Club by United’s legendary scout Louis Rocca and signed as an amateur in December 1935. In May 1937 he turned professional and just six months later made the step up to first- team football. However, just as Pearson was establishing himself in the first team, his career was interrupted by the outbreak of war. During the six years organized football was suspended, he served with the 2nd/4th Lancashires and also managed to make guest appearances for Newcastle United, Brighton and Hove Albion and Queens Park Rangers. Resuming his duties with United in 1946 – and with Matt Busby newly installed as manager –Pearson took up the inside-forward role, becoming one of the best of the day at a time when England had a wealth talent to choose from. He was a key member of Busby’s first great United team that tasted first success the F.A. Cup in 1948 (Pearson scored a hat-trick in the semi-final against Derby County and one in the 4-2 final win over Blackpool) and won the League Championship in 1952. Ever-reliable, Pearson missed only 13 first-team matches in seven seasons between 1946 and 1953, and proved the perfect foil for Jack Rowley. Apart from consistency Pearson possessed a deadly and accurate shot. After losing his place to the young Jackie Blanchflower in the 1953/54 season, he moved to Bury in February 1954 for £4,500, after which became player-manager at Chester where he continued to play until the age of 40. After hanging up his boots, Pearson became a sub-postmaster in Prestbury, Cheshire.