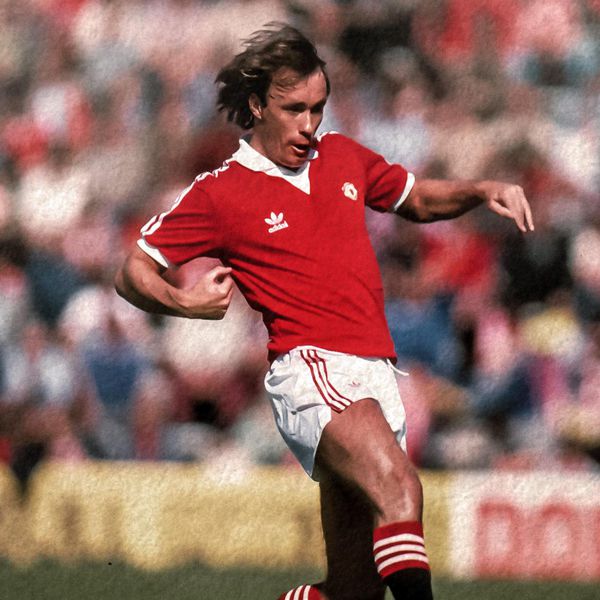 Debuts don't come much more unnerving than the Manchester derby, but the 17-year-old Sammy McIlroy came through his baptism of fire with flying colours - scoring once and assisting twice at Maine Road to instantly endear himself to the United faithful.

His emphatic entrance to the first-team setup didn’t seal a regular starting berth, and McIlroy largely remained a substitute for the next year.

Seriously injured in a car accident in January 1973, he fought his way back into the team against all odds the following season to earn himself a regular place in the starting line-up.

That season ended with the gloom of relegation, but McIlroy was a permanent and crucial fixture in the side that secured an instant return to the top flight. His domestic importance was matched on the international scene, and he went on to win 88 caps for Northern Ireland.

Sammy remained an integral part of the Reds side which went to Wembley three times in four years in the late 1970s. He tasted heartbreak in the 1976 and 1979 defeats to Southampton and Arsenal, although he did score a fine equaliser in the latter final. That disappointment sandwiched United’s 2-1 win over Liverpool in 1977, the only major honour of Sammy’s 11-year Reds career.

Ron Atkinson sold McIlroy to Stoke City for £350,000 in 1982. Three years later he moved back to Manchester to join City on a free transfer before moving into management.

Spells with Northwich Victoria, Ashton United and Macclesfield Town preceded the role of Northern Ireland boss, before Sammy took over at Stockport County, then Morecambe.

Ahead of United's meeting with AZ Alkmaar, here's a classic strike from 1976, scored against another Dutch side in Ajax.

Ahead of our match against AZ, here's a classic Sammy McIlroy strike against fellow Dutch side Ajax in 1976...

Club legend Sammy McIlroy has agreed with Mourinho, by saying: "There is no way that players don't give 100 per cent!"

McIlroy: The amosphere will be electric video

"It will an electric atmosphere today because the rivalry is immense," states an excited Sammy McIlroy...

Would you feature Marouane Fellaini and Eric Bailly against the Merseysiders? Sammy McIlroy's had his say...

Sammy McIlroy is convinced the manager will make changes against CSKA Moscow...