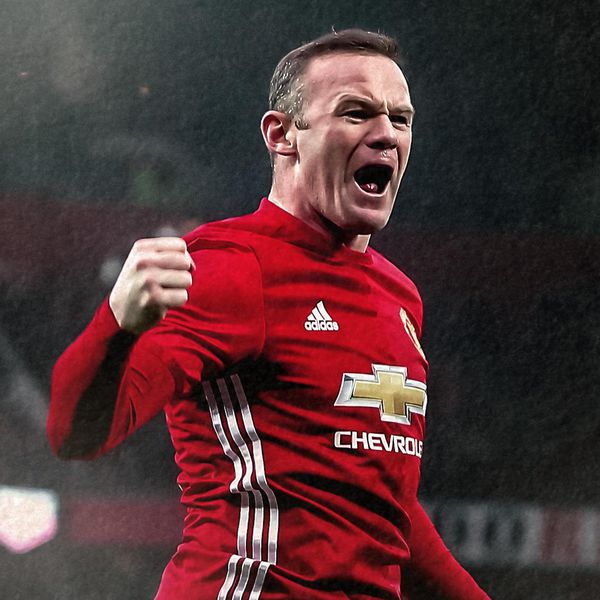 Wayne Rooney is Manchester United's all-time leading scorer and the only player to have scored 250 goals for the Reds.

He reached the milestone when he broke Sir Bobby Charlton's long-standing record in January 2017.

Rooney's place among the icons of Old Trafford was also secured via his appointment as club captain, an honour afforded to him on the eve of the 2014/15 season.

The striker lifted his first trophy as skipper at the end of his second campaign with the armband, when he grasped the FA Cup in May 2016 following a dramatic extra-time win over Crystal Palace at Wembley Stadium. That piece of silverware was the only honour missing from an impressive personal collection that he'd gathered throughout an illustrious Reds career.

Of course, it cannot be forgotten that it was as an exciting teenager that he burst onto the Old Trafford stage in September 2004, netting a wonderful hat-trick on his debut in a Champions League tie with Fenerbahce. Perhaps his performance wasn't that surprising, given the enormous pedigree he had amassed since making a lasting impression on former Academy manager Paul McGuinness some years earlier.

In an Under-9s match between United and Everton, McGuinness recalled: "Rooney scored the perfect bicycle kick, which for a kid of eight or nine years old was really something special." It merely hinted at what was to follow and, of course, it was a trick he would repeat on the biggest of stages - famously in the 2011 Manchester derby, a goal that will be re-shown for eternity.

Despite a difficult World Cup with England in the summer of 2006, Rooney went on to net 23 times for United as the Reds lifted a first English title in four years. Cristiano Ronaldo stole all the headlines in 2007/08, but Rooney chipped in with another 18 goals. His exciting strike partnership with 19-goal Carlos Tevez was one of the key factors in the Reds' Premier League and Champions League double triumph and cemented his iconic status at Old Trafford. But it wasn't just Wayne's goals that made him stand out.

A tireless worker, Rooney always gave 100 per cent on the pitch and couldn't stand losing. Those traits, from time to time in the past, landed him in hot water, but everybody recognised his immense passion and will to win. The striker's ability to adapt was an attribute often overlooked. Although most at home leading the line or playing just behind a main striker, Rooney also delivered from wide areas on numerous occasions. With pace to burn and an eye for a long, raking pass, Rooney was just as effective creating chances as taking them.

That said, goals were Rooney's bread and butter and not even the arrival of Dimitar Berbatov at Old Trafford in September 2008 could diminish his Rooney's potency. Indeed, the pair forged a strong partnership up front and, in January 2009, Wayne embarked on a scoring run that saw him net in five consecutive league games. A month earlier, he stole the show in Japan as United lifted the FIFA Club World Cup, thanks to his winner in the final and a brace off the bench in the semi.

There was more success to follow in 2008/09 as the England striker picked up his third league winners' medal with the Reds. Sadly, however, Rooney and United couldn't add another European crown as Barcelona were victorious in the Champions League final in Rome.

The striker began 2009/10 in fine fettle and, in a 5-0 thrashing of Wigan in August, he fired his 100th and 101st goals for the club. Come May, that tally was 131 as Rooney appeared, at times, to steer the Reds almost single-handedly through both domestic and European waters. His feats were rewarded with a clutch of individual honours, including the PFA and Football Writers' Player of the Year awards.

Rooney had always displayed remarkable promise: now he had proved the hype was more than justified. In October 2010 he penned a new five-year deal, guaranteeing his long-term United future. And while the striker didn't reach anything near top form until the second half of 2010/11, his contribution to the Reds' record-breaking 19th league title was undeniable. When it mattered most, Rooney was there to bang in the goals and drive United towards glory. He dragged Sir Alex's men back from 2-0 down to net a hat-trick in the Reds' 4-2 win at West Ham and kept his nerve to slot home the penalty at Ewood Park that ultimately clinched the title.

United’s no.10 continued his role as talisman into the 2011/12 season, forging a formidable partnership with loan-returnee Danny Welbeck before Shinji Kagawa's arrival influenced Rooney’s role and he turned his hand to a deeper midfield brief on numerous occasions in 2012/13, though the inevitable drop in goals was mitigated by the impact of 30-goal Robin van Persie. Wayne still scored 12 times in the league though, including two in December’s pivotal Manchester derby win, as United stormed to the title again.

His goalscoring exploits continued in 2013/14, as he reached 200 goals for the Reds in all competitions with a Champions League brace against Bayer Leverkusen. In February 2014, during his 10th season at Old Trafford, he put pen to paper on a new five-and-a-half-year contract.

Rooney found the net 19 times in total to finish as the club's top scorer, including a stunning 60-yard strike at West Ham, which was later voted United's Goal of the Season.

The following campaign proved Rooney true to his word as the senior professional helped guide the younger players during a transitional period for the club. He also showcased his versatility throughout the campaign, serving as a pillar of reliability for the Reds’ new boss who felt comfortable trusting the forward up front, just behind the striker and even in midfield. However, despite his constant migrating, the skipper was still a force to be reckoned with on the goalscoring front, adding 13 goals to his tally, to ensure he topped the club's goal charts for 2014/15.

Another 15 goals followed in 2015/16 when he played in a deeper role under van Gaal, effectively as a number 10 behind the exciting young prospect Marcus Rashford, as the Reds' 12th FA Cup was lifted at Wembley Stadium.

He remained captain under his next boss Jose Mourinho and surpassed Sir Bobby's tally of 249 goals for the club when he netted a stunning late free-kick to rescue a point at Stoke City on 21 January 2017. Rooney went on to score three more goals before the end of the 2016/17 season and helped the Reds to land the League Cup and UEFA Europa League before he decided to return to his boyhood club Everton in summer 2017 - but only after 13 hugely successful years at United, where he will always retain legendary status.

Excellent control, lethal finish: Wayne Rooney showed what he was all about, on this day in 2015...

Missing was simply not an option for Wayne Rooney when he was through on goal and on a hat-trick...

In 2008, there was no better combination in world football than Rooney and Ronaldo, as Blackburn Rovers found out...

Find out why our Ivorian winger has earned a place in the United record books.

As we take on the Italian giants once more, let's revisit one of Wayne Rooney's goals against the Rossoneri in 2010...

United have ended City's 21-game winning run & history shows we have previous when it comes to halting unbeaten streaks.

Wayne Rooney capped off an outstanding United performance with this strike as we overcame Villa 4-0 in 2008...

Wayne Rooney was on target for United as we ran out 2-0 winners at Selhurst Park, on this day in 2014...

'One of the best goals ever' Article

Wes Brown discusses Wayne Rooney's wonder strike against City, 10 years on, and backs his pal to succeed as a manager.

Ten years ago today, this incredible moment took the roof off Old Trafford...

There was absolutely nothing stopping this Wayne Rooney strike from hitting the back of the net...