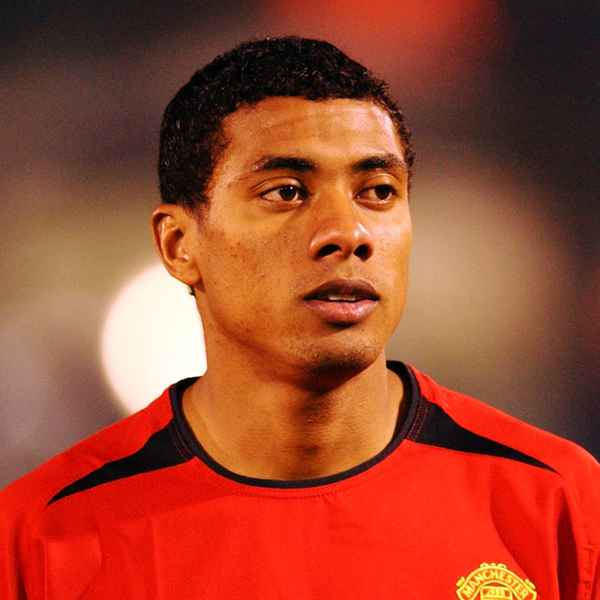 My son is 17 now. He’s a man, he drives his car, takes his sister around. He’s a big United fan and watches all the games wearing his Rashford jersey.

For me, it’s unbelievable to see how fast he’s grown up. Of course, like every father, I still remember the day he was born.

22 November, 2003. That day was unforgettable for a lot of reasons.

United were playing Blackburn at Old Trafford. Like every matchday, we had to get to the stadium three hours before kick-off. My wife was heavily pregnant at that time and she said: “I don’t feel that well. Maybe I should stay at home.”

We spoke about it and decided we would both go. I didn’t know I would be involved in the team that day then, when we get to Old Trafford, I found out I was starting.

During the first half, we did well. Ruud van Nistelrooy scored our first goal and then I scored our second goal. I did the famous baby-rocking celebration like Bebeto at the 1994 World Cup, as I ran over to the corner of the stadium near the players’ tunnel. I still have a great picture of that moment with Rio Ferdinand, Quinton Fortune and a lot of the other guys celebrating with me. I looked up at the fans while I celebrated and my wife was right there by the tunnel, but I didn’t see her.

We won 2-1 in the end so, when I got into the dressing room, I showered, I relaxed, I took my time.

I’d just scored my first goal and we won the game.

As soon as I came out of the dressing room…

“Let’s go! We need to go to the hospital! I think the baby’s coming now!

I remember coming out of Old Trafford in such a hurry. As we came out, all the fans between the stadium and my car wanted to say hi. They were all happy because I’d scored a goal, they wanted me to sign pictures and shirts, and then they saw what was happening.

My wife came through with this big belly…

I came through with these big eyes, so scared…

Later that day, my son was born.

That was such a special day for me. I never thought when I was young that I would play and score for a top team in Europe like Man United, become the first Brazilian scorer in a United shirt, and that my son would be born that same day.

People might say that I don’t have a great history from my time at Manchester United, but so what? I’m so happy with my story. For me, it’s amazing.

I remember when I first heard United might want me. Earlier in 2003, I was playing in a friendly match for the Brazilian national team against France in Paris when I saw some rumours that United wanted Ronaldinho because David Beckham had left. These conversations started to drop my name in there and I remember Ronaldinho and Roberto Assis, his brother, came in the dining room one day and told me: “I think United have interest in you to go there too.”

For the first time, I started to talk with my friends and people from my club, Atletico Paranaense, to see if these rumours might be true. I started to get some information about the players, the city, the country. At that time, compared to now, the technology hadn’t come that far. It was hard to search too much about the team, even though Man United is a top team in Europe! I was so happy to hear of their interest because, still, it’s Man United. “Oh my gosh, really? Of course I want to join.”

So, I didn’t know much about Sir Alex Ferguson at that stage. I knew his name, I had heard that he had already been the manager at United for something like 16 or 17 years, which was like… Wow. For a manager? Oh my gosh. That guy must be controlling the whole club.

Then the conversations started between agents, with Paranaense and United, and I was so happy when the deal was done and I signed my contract.


Of course, it was a big change for my wife and I, coming to England from Brazil. In some ways, I wish I was at United now, because when I went looking for Brazilian restaurants in Manchester back then, I’d be lucky if I found some rice and beans! I was so jealous of when Robinho and Jo went to Manchester City a few years later because, when I was at United, the closest Brazilian restaurant was in London, so if I really wanted some home food then I had to drive three hours to London or some friends would bring it to me. Then Robinho and Jo would pose for pictures in Manchester with real Brazilian food, with churrascaria… oh my gosh. Now I see Fernandinho showing pictures with real barbecues. Come on, man!

Normally, when I had free time in Manchester, we walked or went to the Trafford Centre. We always went there. I remember there was a nice pizzeria in the corner, we’d go there and then walk. We tried to go downtown sometimes in Manchester. I was quite young at that time, but I still felt like town was more for younger people than for me! Normally, because my wife was pregnant, we stayed inside our home and ate Brazilian food. The house was like a little Brazil, you know? No-one spoke English, we had TV from Brazil, games from Brazil on TV, cooked Brazilian food… we wanted to make it as close as possible to Brazil.

Because we were both young and didn’t speak any English, it wasn’t easy to adapt, but there were a lot of people who helped. Firstly, I was so happy that Cristiano Ronaldo had also just signed, because it meant I wasn’t the only one speaking Portuguese, which is far easier for me to speak. I also had Diego Forlan, because we both spoke Spanish, Quinton Fortune was amazing how he helped me with what people were saying, what Ferguson was saying.

Those guys helped me a lot with translating what the other guys wanted from me. It was hard because I was very young at the time, I couldn’t communicate the language so it was hard to understand the culture of the team, what people wanted. I tried to do my best to get more information, but my English was not great and it pushed me back a bit. I can have no questions about the players and the people who worked at Carrington. They were always friendly with me, spoke to me, tried to help me understand what to do.

In the club at that time, we had players with great background – Paul Scholes, Nicky Butt, Ryan Giggs, Roy Keane – and they brought in young guys like me and Eric Djemba-Djemba to fight with those guys… it was not a fair fight, to be honest!

Those guys knew how to play in the Premier League, they had grown up there. Me and Djemba-Djemba just had dreams of beating those guys, and they were very nice guys, very patient – saying that we were the future, trying to help us – but they were just too far ahead of us.

One thing that I struggled with personally were the injuries I had, which were pushing me back. Then you lose time, you have to recover, then you have to get good physically, good technically. Then we had to come back and compete against Scholes, Butt, Giggs, Keane. Those guys had been in the team for many, many years, they knew what was required. As new guys, we came in like: “Ok, let’s play my style,” but it didn’t work out that way.

I learned a lot off those guys, especially the quality they had, how they managed the ball, how they led the team. We had our captain, Roy Keane, but Gary Neville was like a second captain, also Phil Neville, Nicky Butt, Paul Scholes, Ryan Giggs, they almost managed the team. The way they talked, the way they communicated to you outside the field, the way they made the team feel like a family, put everybody on the same page, I was so glad to learn that.

I learned a lot as well from Sir Alex Ferguson, Carlos Queiroz, Mike Phelan. Let’s take a look back: it’s hard to manage that team at that time because everyone played for their national team. Outside of the players who were first choice, I would go to Brazil, Quinton Fortune would go to South Africa, Diego Forlan would go to Uruguay, Cristiano would go to Portugal, Djemba-Djemba would go to Cameroon… everybody was an international, everyone wanted to play. It must have been so hard to manage their playing time. Sometimes you would see Ruud van Nistelrooy sitting upstairs behind the bench, not even dressed. Oh my gosh. One day he’s scoring three goals, next game he’s rested.
One way I sometimes feel that I failed is that I should have tried to stay in England longer than I did before going to Turkey to join Besiktas. I had a good time in Turkey and enjoyed it a lot, people made me so welcome and happy, but if I had decided to stay in England and fight for a spot at United or go on loan to another club, that would have been the best choice for me at that time.

But you always learn, and there were a lot of good lessons for me in Manchester - lessons I try to carry into my philosophy of coaching today. I’m an academy coach now at Philadelphia Union in the United States, which is great because Philadelphia’s great, it’s a nice city to live, a big city with big history here in America. My English is a lot better now, although I still have one lesson a week. When we first came over here from Brazil, we knew it would be a good place to live, with good education for the kids and opportunities for me to coach. My time at United is still important for me because I still use a lot of the things I learned in England to teach the kids I’m working with now.

People may not think it went so well for me at United, but I had a great time, enjoyed myself, made a lot of good friends and that’s one thing I’ll always remember. I hope to one day go back to Old Trafford but, even if I don’t, I’m happy with my story.