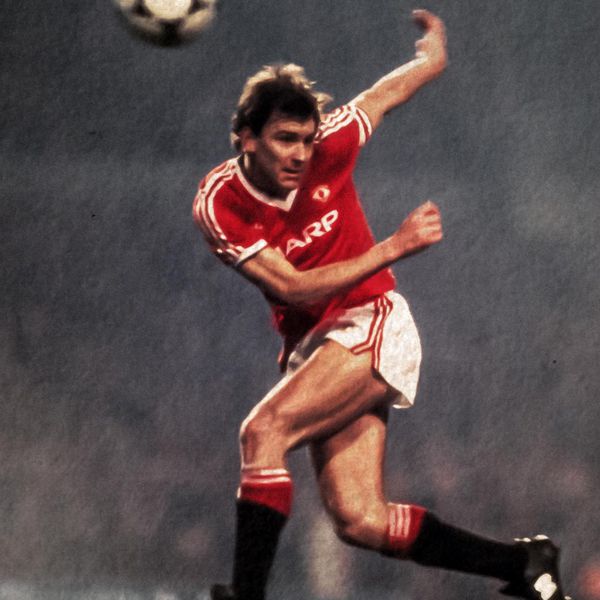 It was a fitting climax to United's 1992/93 FA Premier League championship season when Bryan Robson scored the campaign's last goal to clinch a 2-1 victory against Wimbledon at Selhurst Park.

Six days earlier 'Captain Marvel' had jointly accepted the FA Premier League trophy with Steve Bruce as the curtain came down on an Old Trafford season in which a 26-year wait for the game's ultimate domestic honour was finally over.

Back and hamstring problems had blighted Robson's season, but in typical fashion he fought bravely to reclaim his place. Indeed, various injuries plagued so much of his remarkable career for club and country, that it was laughably suggested at times by the media that he should ease up! For such a fiercely committed and courageous player it was perhaps just an inevitable price that had to be paid.

In his early days with West Bromwich Albion, three leg breaks inside a year threatened his future, but with great determination he somehow made a complete recovery.

He had appeared in close to 200 league games for the Baggies, scoring 39 goals, when new United boss Ron Atkinson returned to his former club and paid a joint fee of around £2 million to bring both Robson and Remi Moses to Old Trafford in October 1981. The deal rated 'Robbo' at a then-record £1.5 million.

Some doubted Atkinson's wisdom, but Robson was destined to become one of the game's midfield greats. He quickly grew in stature, replacing Ray Wilkins as club captain, a player with whom he enjoyed such a fine understanding and one who helped develop Bryan's already mature reading of the game.

A supreme motivational force, Robson in his prime was a shining diamond, blessed with a seemingly endless supply of stamina, great creative passing skills in attack or defence, controlled aggression in the tackle, plus the added bonus of genuine pace and powerful shooting and heading ability.

Robson scored well over a century of league goals in his career – many from steaming late blind side runs into the area. But perhaps above all, he was an inspiring captain for both club and country, uniquely leading United to a hat-trick of FA Cup wins in 1983, 1985 and 1990. In the '83 final against Brighton and Hove Albion he scored twice in the 4-0 replay victory.

He was a League Cup finalist in 1991 and collected a prized European medal when he lifted the Cup Winners' Cup in the same season.

Robson won 90 caps for England, wearing the Three Lions in three World Cups. His 26 international goals included a hat-trick against Turkey in 1984, and a strike after just 27 seconds against France in the 1982 World Cup, which was the second-fastest goal of the tournament’s final stages.

In his final two seasons Robson started only 15 Premier League matches, but usually made a telling contribution when called upon and could hardly have ended his illustrious career on a more satisfying note than seeing United complete the coveted League and Cup Double in 1994.

An early recruit by England's new manager Terry Venables as coach and right-hand man, Robson was quickly snapped up on a lucrative contract by Middlesbrough when he announced his impending exit from Old Trafford. After seven seasons there as manager, and following a relegation battle, Robson left in June 2001.

He later resurfaced with his first club, West Bromwich Albion with whom he completed a remarkable escape from Premiership relegation in 2004/05, before spells at Sheffield United and as the national boss of Thailand. These days he's a Manchester United ambassador, bringing him into contact with many of the fans who idolised him for over a decade.

United legend Bryan Robson says the Reds cannot make excuses after our trip to The Hawthorns...

On a magical night at Old Trafford in 1984, Bryan Robson bundled the ball over the line against the Catalan giants...

Which Bruno trait does Robbo most admire? Article

Captain Marvel thinks something Fernandes does on the pitch is essential for any successful team.

The lost United Player of the Year winners Article

Extensive research by the Museum finally provides recognition for a number of our stars from yesteryear.

Bryan Robson had it all. Check out this magnificent header from Captain Marvel, on this day in 1982...

United saddened by the death of Maradona Article

Club ambassador Bryan Robson reacts to news that the Argentina legend has passed away aged 60.

We round up the internationals and two midfield greats, Matic and Robson, discuss Saturday's opponents, West Brom...

Robbo explains which is his all-time favourite United jersey...