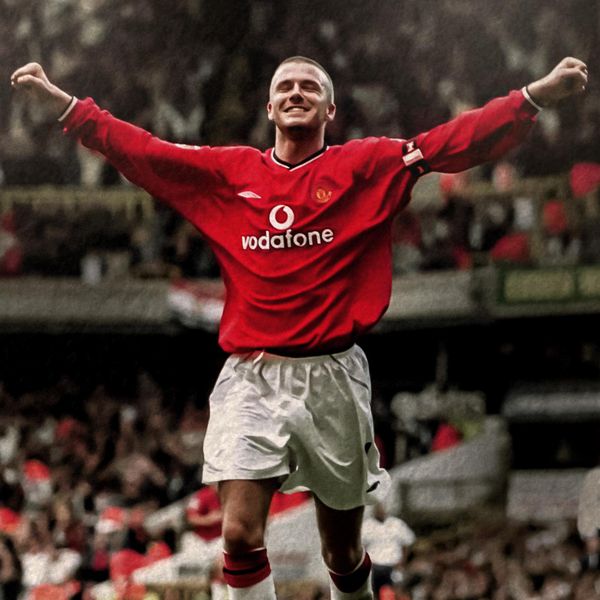 Arguably one of world football’s biggest names, David Beckham is a global phenomenon but a part of him will be forever Red.

A decade spent marauding up United’s right wing contributed to the most successful period in the club’s history, and his 57-yard strike against Wimbledon is surely one of the most replayed goals of all time. He followed in the footsteps of his boyhood idol Bryan Robson by eventually captaining England, and he is the only England player to have scored in three different World Cups.The story began in July 1991 when a lifelong United fan moved north from Leytonstone to sign apprentice forms for the Reds. He formed part of the Class of ‘92 that won the FA Youth Cup along with Ryan Giggs, Nicky Butt, Paul Scholes and Gary Neville but had to wait for his league debut - at home to Leeds United on 2 April 1995. The departure of Andrei Kanchelskis freed up a place of the right of midfield, and Beckham made it his own. Bagging the winner in the FA Cup semi-final against Chelsea proved he was a man for the big occasion, and the season ended with United winning a second Double.Beckham began the 1996/97 campaign with that goal from the halfway line at Selhurst Park and a month later began his England journey with a debut against Moldova. That season brought another Premiership medal, but in 1998 Arsenal took the title back as Beckham headed for the World Cup in France. After being left out of the starting line-up for England’s first two matches, he then scored a stunning free-kick against Colombia and was hailed a national hero. It wasn’t to last. Facing Argentina in the second round, he was sent off for a foul on Diego Simeone and ten-man England were knocked out.Mocked by the press and vilified by fans across the country, he was welcomed back into the arms of the United family. Beckham responded by scoring a trademark free-kick against Leicester City in the first Premier League game of 1998/99, and went on to enjoy a season that would have been beyond his wildest dreams as the Reds won the Treble. Among his many contributions to that glorious campaign were the equaliser against Tottenham Hotspur in the final league fixture, as Sir Alex Ferguson's men came from behind to clinch the title at Old Trafford, and the two corners from which United scored last-gasp goals through Teddy Sheringham and Ole Gunnar Solskjaer to beat Bayern Munich in the Champions League final.The following season brought his fourth Premiership winner's medal and Beckham was voted the second best player in Europe and the world as Rivaldo of Barcelona and Brazil pipped him to both awards. 2000/01 was another Premiership-winning season and having been handed the England captaincy he almost single-handedly booked his country’s place in the 2002 World Cup finals with an incredible matchwinning performance against Greece at Old Trafford.Ever the trend-setter, Beckham introduced the world to the word 'metatarsal' when he broke his foot in a Champions League match against Deportivo la Coruna but recovered in time to score a redemptive penalty against Argentina in the World Cup.The next season proved to be his final one at Old Trafford and after months of speculation, Beckham made the switch to Real Madrid in the summer of 2003 but not before picking up his fifth Premiership medal and signing off in style with a final free-kick goal in his last United game against Everton.Beckham spent four seasons in Spain, winning La Liga in the last of those, before signing for LA Galaxy, where he won two MLS Cups. Two loan spells with AC Milan followed before he moved to Paris Saint-Germain in January 2013 and helped them to win their first French league title for 19 years. He played his last competitive match before retiring from football, Lorient v PSG, on 26 May 2013 - also the 14th anniversary of his finest hour in a United shirt, the night when the Treble was won.Beckham is England’s second most-capped outfield player with 115 appearances.

Marcus has been busy climbing the club's all-time goals list and, on Instagram, a certain United legend has responded...

As we face Spanish opposition in Europe, let's bring back this vintage David Beckham screamer, from 2002...

It's Valentine's Day and we're in love with this David Beckham free-kick, against Los Blancos in 2003...

David Beckham's delicious chip secured a crucial league win over Birmingham, on this day in 2002...

When you leave David Beckham free inside the box, you're asking for trouble...

Find out which three United and England greats Marcus matched after his successful penalty against Belgium.

David Beckham smashed the winner in off the post as United beat Liverpool on this day in 1996...

Do you remember Beckham's debut? video

See highlights from the game when Becks made his bow - at Brighton back in 1992...

In our round-up of the latest stories, we hear from Ole and Nemanja Matic, plus Denis Irwin on David Beckham's debut...

Becks bagged the final goal in our impressive 5-3 comeback victory at White Hart Lane, on this day in 2001...

This free-kick in 1998 is absolute perfection, but the knee slide might need some improvement, Becks...