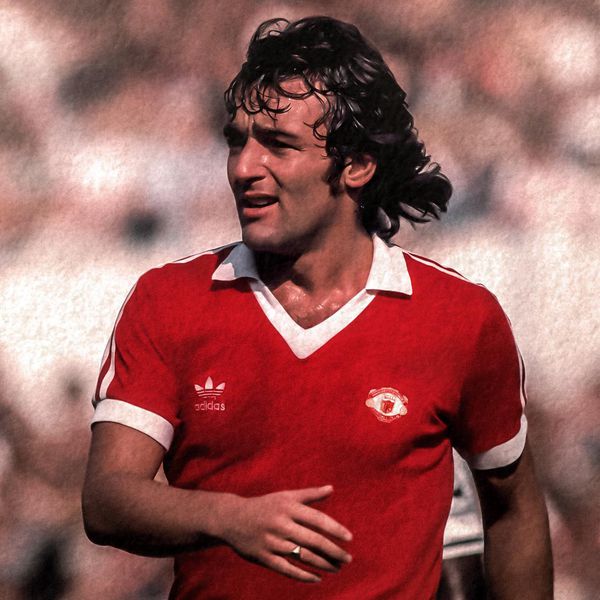 Lou Macari enjoyed 12 memorable years at Old Trafford – but so nearly ended up a Liverpool player.

In 1973 the Scottish striker was courted by Anfield boss Bill Shankly, and was a guest as Liverpool took on Burnley in an FA Cup tie. Coincidentally, United assistant manager Pat Crerand was sat close by, learned of Liverpool’s intentions and persuaded Macari to have talks with United instead.

Five days later Macari moved to Old Trafford for £200,000, leaving Shankly to claim that the striker would only have been a substitute at Anfield!

Macari had attracted attention as a young striker with Celtic. In six years with the Glasgow giants, he won two league championships and two Scottish Cups, and played in three League Cup finals.

His fee raised a few eyebrows, but he quickly endeared himself to the United faithful by scoring on his debut, in a 2-2 draw with West Ham at Old Trafford.

Macari helped United to the Second Division championship, (finishing second in the scoring charts with 11) an FA Cup winner’s medal in 1977 and runners-up medals in 1976 and 1979. He was never an overly prolific striker, and in the late 1970s Tommy Docherty moved him into a midfield role.

The switch greatly improved Macari’s game, but his United career took a turn for the worse when Ron Atkinson replaced Docherty in 1982. The Scot spent the majority of the next two seasons on the United bench, and he left in the summer of 1984 to turn his hand to management.

Macari’s first role was as player-manager of Swindon Town, which preceded spells at West Ham United, Birmingham City, Stoke City (twice) and Celtic. He also worked as a scout for the Republic of Ireland, and is a regular pundit on MUTV.

The beloved former United midfielder is not letting COVID-19 halt his incredible efforts in Stoke.

Read how United stole a star name from right under Liverpool's noses.

United greats Denis Irwin and Lou Macari were both really impressed by our Europa League win in Austria...

Our latest 'Goal of the Day' is this classic from Lou Macari, who made his debut 47 years ago today...

This emotional clip from the latest episode of UTD Podcast highlights exactly why we all love Lou Macari...

In a lighter moment, Lou's podcast is interrupted by the ex-Lord Mayor of Stoke and even Elvis! Take a look...

UTD Podcast: Why Lou has a soft spot for Ole Article

Macari takes part in a tear-jerking episode, as he reveals a personal debt to the United manager.

Paddy Crerand, Lou Macari and David May discuss the attributes of our new signing Daniel James...

Webber and Macari's verdict on the victory video

What did you make of our crucial win over West Ham? Danny Webber and Lou Macari give their verdict in the MUTV studio...

'We'll settle for being in the next round' video

"The fact we didn't really get going but still won 2-0 is a good sign," says Lou Macari in the MUTV studio...

It was involved for Juan Mata's penalty, but what do Lou Macari and David May make of VAR? Let's hear from them...

'It's been a good week for United' video

"It's been a good week and you tell by the press conference that the manager is a lot happier," says Lou Macari...