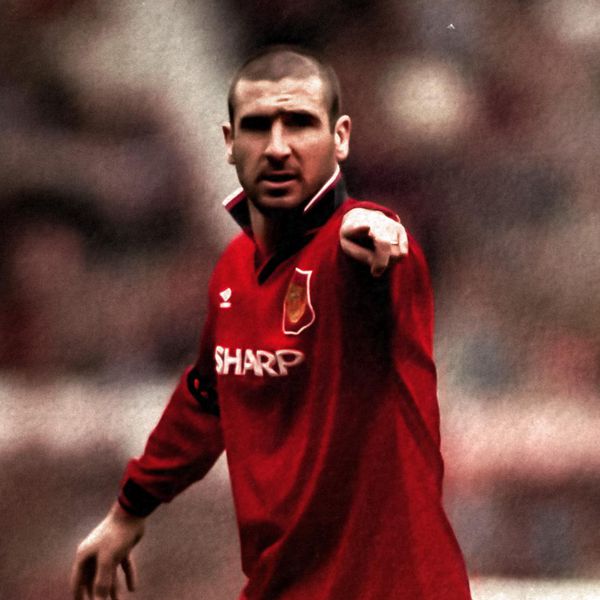 “Le Roi”.“Le Dieu”. Or good old – but never, ever, plain old – Eric. Whatever you want to call Monsieur Cantona, the Frenchman’s four-and-a-half seasons at Old Trafford are the stuff of legend.

No.7 shirt collar as stiffly upright as if it had been starched, that imperious look, theatrical swagger and poise, Eric Cantona was born to play for Manchester United – and, even better, he was pinched from across the Pennines to do so.The wandering ‘enfant terrible’ of French football, despite title success with Marseille in 1991 and close on a half-century of caps for his country, Cantona had famously ‘retired’ from the game at 25 when a trial with Sheffield Wednesday alerted the attentions of Leeds United boss Howard Wilkinson, eager to bolster his side’s flagging title fortunes for the 1991/92 run-in. Enough said about that…Astonishingly, given his success in Yorkshire and a Charity Shield hat-trick against Liverpool during the 1992/93 curtain raiser, Sir Alex Ferguson’s enquiry as to whether the mercurial Frenchman might be for sale was met with a nod in December. A £1.2 million deal – no, that’s not a misprint – was promptly done, and Cantona went to work. The next four-and-a-half seasons would see him stamp his name indelibly on the club’s history, his heart and soul seemingly in tandem with it: his prophetic pronouncements, his pure, well, Frenchness, finding a spiritual home on the turf where George Best had strutted his stuff so majestically two decades earlier. The missing piece in the long-awaited championship jigsaw, Cantona’s nine goals in 22 league games helped bring home the inaugural Premiership trophy of 1992/93.With his probing presence, United would fail to win the trophy just once in the following four campaigns, Cantona leading scorer in two and second in the other. It wasn’t just his technical ability that fired the imagination, it was his talismanic qualities. He led by example, defiant, never giving in. It was a three-way relationship between player, team-mate and fans – if he thought it was possible, so did you.When the FA threw the book at him with a nine-month ban in the 1994/95 season following his infamous Kung-Fu spat with a Crystal Palace fan at Selhurst Park, Cantona retained his dignity and did his 120 hours’ community service with no complaints. And of course, he scored on his return – against the old enemy Liverpool in October, netting a penalty to salvage a point at Old Trafford. With Cantona orchestrating the talents of a young David Beckham and Ryan Giggs, and Roy Keane in his pomp as midfield general, United proved irresistible in 1995/96. Cantona led the way with 19 goals in all competitions, one of four men to reach double figures. He scored in six consecutive Premiership games through March and April as United faced down the faltering challenge of Newcastle United to take the title. And it was Cantona again, firing through a crowd scene at Wembley, to see off Liverpool in the FA Cup final to complete a second Double in three seasons. That season was the pinnacle of his time at Old Trafford.At the end of the 1996/97, another title in the bag, but with the disappointment of a European semi-final exit proving a tough cross to bear, he exited stage left. His deeds burn brightly and will never fade. Vive la resistance!

Pace, power, technique: Eric Cantona showed what he was all about with this terrific goal, on this day in 1993...

Goals from Rashford, Ronaldo, and Rooney all feature… but how many of them can you remember?

To celebrate the 50th episode, we've picked out five shows you need to listen to - now!

A mazy run from Giggs, finished off by an unstoppable header by Eric – there’s plenty to enjoy about this goal...

Phil Neville's first league start came against City, but which other Reds began their United careers against the Blues?

Today's golden goal was chosen by @Ricky_Spanish89, who's plumped for this unimprovable piece of Cantona magic...

How ‘The King’ inspired Mata Article

As part of his MUTV Takeover, Juan sheds some light on his friendship with an Old Trafford legend.

Enjoy every minute of a classic Eric Cantona match, as we mark The King’s birthday weekend...

King Eric is 54 on Sunday! What a great excuse to show the goal that felled Liverpool and secured the Double Double...

We'll show one of Eric Cantona's greatest matches in full on Saturday – it's time to cast your vote!