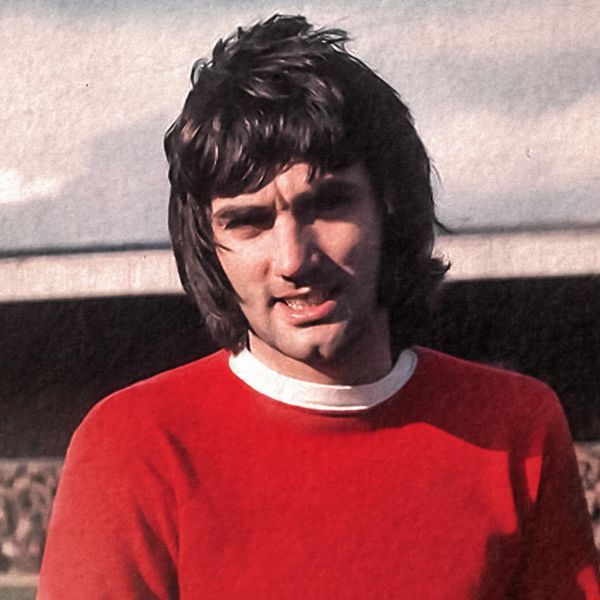 “If I’d been born ugly, you’d never have heard of Pelé.” Many a true word is spoken in jest, and few would argue George Best was the most naturally gifted footballer Britain has produced.

Speed, balance, vision, superb close control, the ability to create chances and score from seemingly impossible situations tells half the story. The other half was an uncontainable zest for the game as it should be played, a ceaseless trickery and joy. Pelé, for his part, dubbed United’s no.7 "the greatest player in the world."

Having fought off initial homesickness, Best turned professional on his 17th birthday in May 1963, made his debut in September – and scored on his second appearance. A first cap for Northern Ireland swiftly followed. And in 1964/65, alongside Denis Law, Bobby Charlton and David Herd, Best was a key figure in the Reds’ first title triumph since the pre-Munich era.

The following season he almost single-handedly destroyed Benfica in the European Cup quarter-final in their own back yard. After scoring twice in a 5-1 success to inflict the Lisbon giants’ first home defeat in Europe he was dubbed ‘El Beatle’.

A second title followed in 1967, and Best proved the scourge of Benfica again a year later in the 1968 European Cup Final, giving the Reds a 2-1 extra-time lead en route to a 4-1 success. Best’s 28 goals that season – he was PFA and European Footballer of the Year – made him United's top scorer, a position he retained over the next four campaigns.

As the Busby era ended and an ageing side was dismantled, Best struggled with the personal demons that would dog him until his death in November 2005. He famously ‘retired’ to Marbella in 1972, before coming back again and eventually leaving for good in January 1974 for a globe-trotting series of destinations taking in, among others, the rather unlikely surrounds of Dunstable Town, Fulham, Los Angeles Aztecs, Brisbane Lions and the Jewish Guild of South Africa.

As he asked, he should be remembered for the back-page headlines, not the front. And what glorious memories they are. His 361 league appearances in Red brought 136 goals; he holds the post-War record for the most goals by a United player in a single match – six versus Northampton Town, in an 8-2 FA Cup fifth-round mauling in 1970.

Best’s send-off in November 2005, a riotous afternoon of applause at West Ham, was followed by a game of which he would have been justly proud. Appropriately enough, fellow Irishman John O’Shea netted the winner.

When Best, Law and Charlton first played together Article

We're marking a major milestone in club history by showing you objects from the United Trinity's stellar careers.

One of our very greatest players has been included in France Football's 'Dream Team'.

We pay tribute to one of United's greatest, 15 years after his untimely passing.

Some people compare Pele and Maradona to George Best, but Alex Stepney says his friend was the greatest...

📽 On this day in 1963, George Best began his iconic United career! ❤ Here's why he's one of our greatest players...

When Best played for Bournemouth Article

All the facts you need to know about our treble scorers, after Anthony Martial took the match-ball home on Wednesday.

Thornley: How I was humbled by Best comparison Article

In the new UTD Podcast episode, Ben Thornley recalls his time as an exciting winger in United's youth team.

As a tribute to Tony Dunne, here are the highlights from his team's greatest triumph - the 1968 European Cup final...

A genius was born on this day in 1946. In George Best’s honour, we’ve unearthed this little-seen gem against Leicester…

There are some surprises in the boys' side – find out which two current first-teamers get in and who misses out!