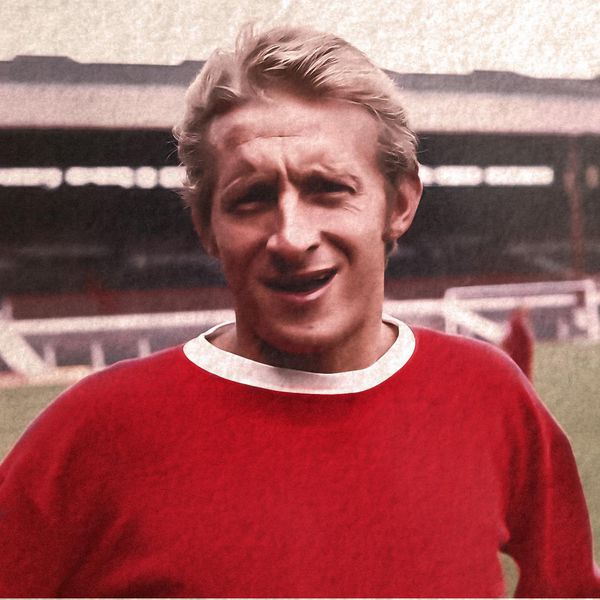 Denis Law is the only man to have two statues dedicated to him at Old Trafford – one on the Stretford End concourse, the other as part of the United Trinity statue overlooking the stadium’s forecourt where he’s immortalised alongside fellow great George Best and Sir Bobby Charlton. Both stand as testament to one of the Reds’ true living legends.

The ultimate goalscorer, his flair, spirit and genuine love for the game made him a hero of a generation and he revelled in the nickname The King. His reign lasted for 13 years.

The first time United fans saw Law score for the Reds was on 18 August 1962, on his debut against West Bromwich Albion. He was to repeat the feat a further 236 times for United, many of those celebrated with what became his trademark - arm in the air, hand clutching his sleeve, finger pointing at the sky. It was a move aped in the playground by thousands of boys up and down the country, no matter their allegiance.

Law’s journey to Old Trafford followed a long and winding road. Starting off at Huddersfield in 1955, he signed for Manchester City for a British record fee in 1960 and moved to Torino in Italy the following year.

He didn’t take to Italian football and one year later Matt Busby enticed him back to Manchester - this time to play in the Red of United. By that point he was an international regular, having been handed his first cap in 1958 at the age of 18.

A goalscorer in the 1963 FA Cup final as United defeated Leicester City 3-1, it was his sixth of the tournament. He was just getting started. Thirty goals in 41 games in the following season saw him finish as United’s top scorer again as the Reds won league titles in 1965 and 1967 but devastatingly, injury deprived him of a place in the 1968 European Cup final side. Law was recuperating in a Manchester hospital following an operation on his injured knee as his mate George Best was running rings round Benfica in the final at Wembley. The following day, he had a bedside visitor - Sir Matt Busby, along with the European Cup.

The United side of the time struggled to match the highs of Wembley, and with Tommy Docherty installed as the new manager and the rest of the 'Holy Trinity' - Best and Charlton - now departed, Law rejoined Manchester City on a free transfer in July 1973.

The final goal of his career came towards the end of the infamous derby match when his backheeled shot gave Manchester City victory and compounded United’s already confirmed relegation. This touch was his final one in league football as he asked to be substituted immediately, cutting a forlorn figure as he left the field, mobbed by invading Reds. Denis Law later talked about this incident, admitting: “I have seldom felt so depressed as I did that weekend.”

He retired from football after the 1974 World Cup finals in West Germany where he made the last of his 55 appearances for Scotland, having scored a record 30 goals - an achievement he shares with Kenny Dalglish. He also held the record for the most FA Cup goals (41) before it was passed by Ian Rush in 1996. While his tenacious style often fell foul of referees - he once sat out two month-long suspensions in the space of a year - he played football the way fans would have played if they had his God-given talent, combining the spectacular with the impudent. His great friend George Best described him as: “Up there with the all-time greats. Electric. As a bloke and as a pal he’s different class.” Thousands of United fans will echo those sentiments.

On the legend’s 81st birthday, we recall how the brilliant Scottish striker became one of United's greatest players.

When Best, Law and Charlton first played together Article

We're marking a major milestone in club history by showing you objects from the United Trinity's stellar careers.

The times we broke the British transfer record Article

Rio Ferdinand was one of the six benchmark signings - can you remember the five others?

All the facts you need to know about our treble scorers, after Anthony Martial took the match-ball home on Wednesday.

Denis Law opened the scoring as the Reds eased to a third FA Cup, at the expense of Leicester, on 25 May 1963…

'He could've been the world's best left-winger' Article

The manager sent his birthday wishes to the United legend after Sunday's game...

Happy birthday to the King! Article

United’s club historian, Cliff Butler, pays tribute to his hero, who was crowned 'The King' by supporters.

Crerand on Law at 80 video

On Denis's 80th birthday, marvel at his incredible over-head kick goal against Palace in 1971...

Law: Gregg was one of the greatest Article

Denis Law described Harry Gregg in glowing terms ahead of his former team-mate's funeral on Friday.

On this day in 1964, United's legendary attacking trio played together for the first time.

Why Denis Law is a United icon video

As Denis Law celebrates his 79th birthday, here are just a few reasons why he's still called The King of Old Trafford...