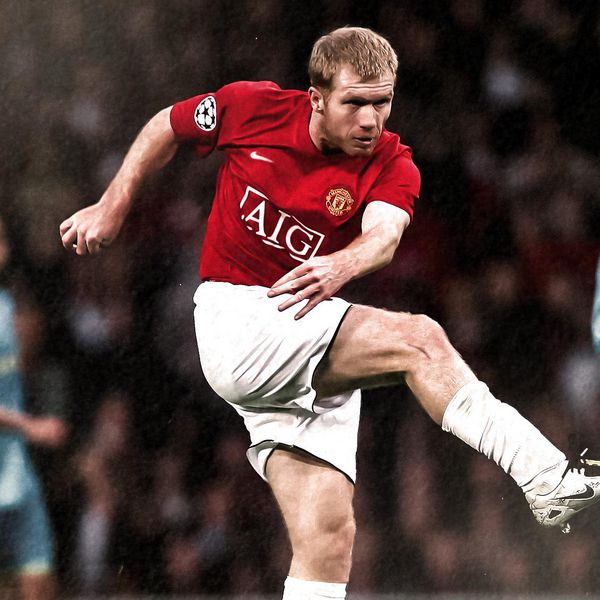 You must have a rare and special football talent to impress the great Sir Bobby Charlton.

The United legend summed up Paul Scholes perfectly: "He’s always so in control and pinpoint accurate with his passing – a beautiful player to watch."

Part of the new wave of talent that ushered in David Beckham, Ryan Giggs, Nicky Butt and Gary and Phil Neville in the mid-1990s, Salford-born Scholes scored twice on his debut in the League Cup at Port Vale in 1994/95 – and on his first league outing against Ipswich – and never looked back.

A host of golden seasons at Old Trafford include 1995/96’s Double-winning campaign, in which he covered admirably during Eric Cantona’s suspension, finishing second behind the Frenchman in the scoring charts with 14 goals. He was a cornerstone of 1999’s Treble-winners, although suspension ruled him out of the UEFA Champions League final, and, in United’s Premier League success in 2003, his 20-goal haul was vital.

Neat and compact, a misplaced Scholes pass was one of the rarest sights in football. His superb eye for goal and late runs from midfield also served his country superbly on 66 occasions.

An eye problem kept the midfield magician out of action for a large part of 2005/06, but he burst back onto the scene during the 2006/07 title-winning campaign, playing a key role in helping the Reds reclaim the Premier League crown. Personal highlights included his opener in the 2-0 win over Liverpool in October 2006 and a volley of the highest calibre in the 3-0 win at Aston Villa two months later, which earned him the Goal of the Season gong at the club's annual awards ceremony.

His contribution in 2006/07 was recognised by players and press alike - he finished third in the PFA Player of the Year category and fourth in the Football Writers' vote, both of which were won by team-mate Cristiano Ronaldo.

Scholes' good form continued the following season as he helped the Reds to a glorious double and finally buried the UEFA Champions League ghost of '99 when his stunning strike against Barcelona in April 2008 booked United's place, and his own, in the final in Moscow.

Having started United’s first four Premier League games in 2008/09, Scholes then missed two months of action after suffering a medial ligament injury in the victory away to Aalborg. When he returned for the festive period, Sir Alex proclaimed: “It is like having an extra player.” The Reds stalwart looked as influential as ever, and when he didn’t start he often came on to steady the tempo of games and help close out narrow league victories. His opener in United’s 3-0 victory over Fulham in February 2009 – a game he dominated – proved he hadn’t lost his deadly ability to score from distance. Carrick’s corner found Scholes in a familiar position at the edge of the area, and he rolled back the years to thunder in a 25-yard volley that was simply too hot for Mark Schwarzer to handle. He followed that with a vintage header away at Sunderland in April 2009 and, in his 600th game for the Reds, delivered a masterclass in ball retention against Portsmouth 10 days later. He went on to claim his ninth winners medal as United sealed a hat-trick of league titles. Little wonder he was rewarded with a one-year contract extension in April 2009, taking him through to June 2011.

While Scholes questioned his own contribution to the United cause midway through the 2009/10 campaign, he went on to show that he remained a hugely important cog in the Reds' well-oiled machine - thanks to a host of majestic midfield displays. His habit of bagging important goals clearly hadn't deserted him either - just ask Manchester City. His strikes against the Blues, Besiktas and Wolves (his 100th Premier League goal) were all winners, and his contributions against Milan in the San Siro and City in the League Cup were further proof that the big players come good on the big occasions.

Unusually he managed only one goal during the title-winning 2010/11 season, away to Fulham, which was his 150th strike for the Reds. His appearance as a substitute in the UEFA Champions League final defeat to Barcelona at Wembley appeared to be his final game for the Reds as Scholes confirmed his retirement three days after the Wembley final. The announcement came in a typically low-key manner - no interview, no fuss, just a statement on ManUtd.com confirming his decision to stop playing and start coaching with United.

A week later came his richly deserved testimonial match to honour his 19 years of service to the club as the Reds hit six without reply past New York Cosmos, whose director of football at the time was one Eric Cantona. In typical Scholes fashion, the midfielder - who opened the scoring with a trademark strike from 25 yards in his testimonial - sprung another surprise.

Five months later, Scholes reversed his decision to retire, making his comeback in the 3-2 FA Cup win at Manchester City as a substitute and wore the number 22 shirt he hadn't worn since 1995/96. He scored on his first start in his second spell a week later in a 3-0 win over Bolton and netted two more goals before the end of the season.

Paul signed a one-year deal to stay on for the 2012/13 campaign, during which he marked his 700th appearance for the club by scoring in a 4-0 victory over Wigan. It meant he had scored in his 19th consecutive Premier League season, a feat only surpassed by team-mate Ryan Giggs. Having helped United win the Premier League title, Scholes hung up his boots for good after his 499th and final league appearance for the Reds in an eventful 5-5 draw at West Bromwich Albion in May 2013 - which was also Sir Alex Ferguson's farewell as United boss.

Our latest episode of MUTV Group Chat is a 26-minute belter with Paul Scholes, who is typically honest in his views...

Adnan Januzaj is a player we need to watch out for on Thursday evening, warns Paul Scholes.

Paul Scholes scored goals and this team effort against the Greek champions, in 2000, was nothing short of excellent...

What does Scholes think of Bruno's volley? Article

Don't miss what Paul says about our Portuguese playmaker and his stunning goal against West Brom...

Which Bruno trait does Robbo most admire? Article

Captain Marvel thinks something Fernandes does on the pitch is essential for any successful team.

Paul Scholes scored a crucial Manchester derby goal as United progressed to the League Cup final, on this day in 2010...

Paul Scholes scored goals, and his 150th United strike was a trademark finish...

Bruno has matched the record of a United legend after scooping his fourth Premier League Player of the Month award.

When United beat City in the League Cup semi video

Scholes: Bruno's even better than me! Article

The United legend has been blown away by the incredible statistics our Portuguese midfielder has posted this year.

Scholes, Viduka, Solskjaer (two), Giggs, Harte and Bowyer all scored in this battle at Elland Road in March 2002...

Let's head back to 1 April 2000 and a stunning 7-1 win over the Hammers, when Paul Scholes scored a hat-trick…

Bruno: Maybe I am closer to Scholes Article

We know how good Paul was, but how does Fernandes rate him compared to Lampard, Gerrard, Zidane, Pirlo and others?

Scholesy starts this epic move off, before sticking it in the back of the net with a beautiful chip...