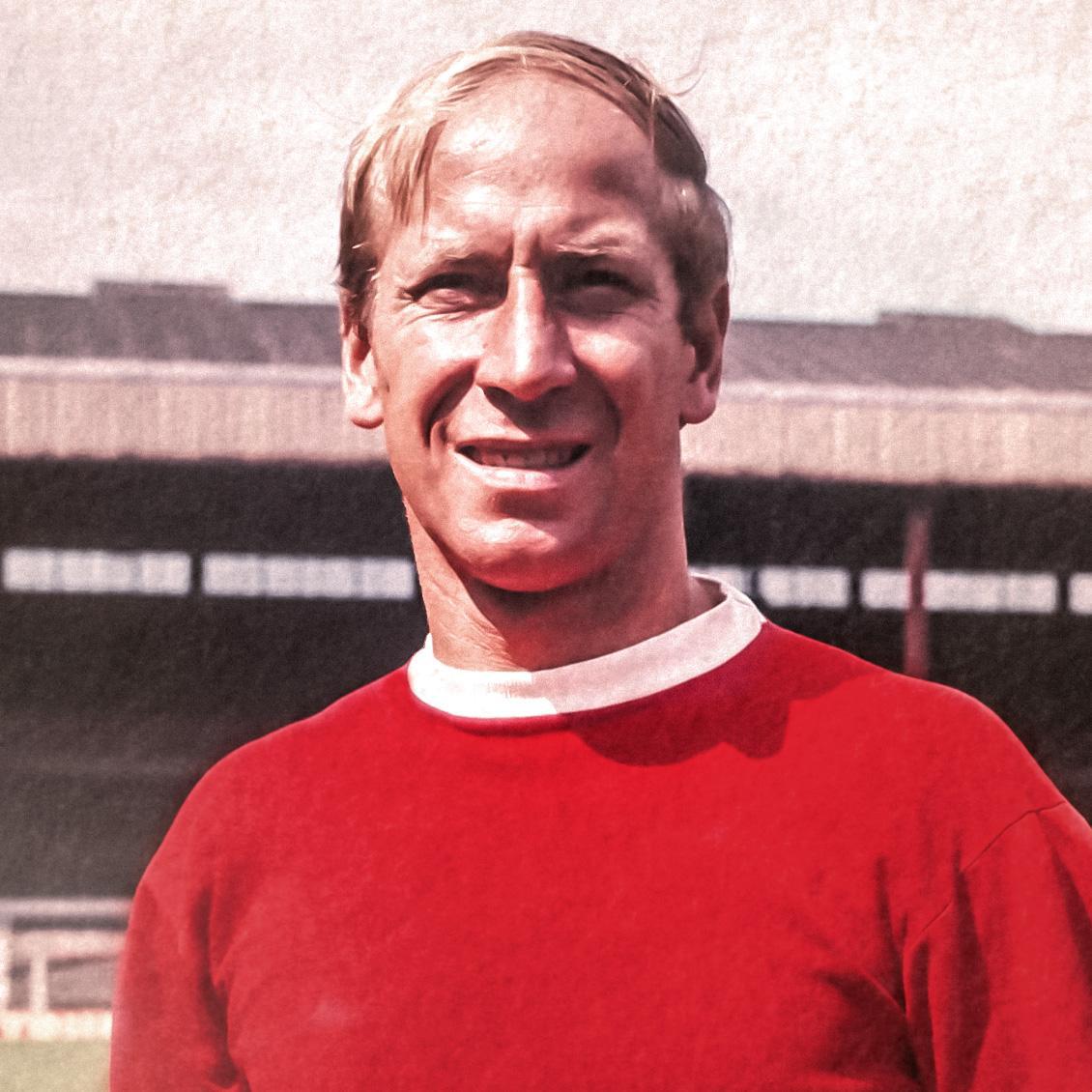 Nobody embodies the values of Manchester United better than Sir Bobby Charlton. Having survived the trauma of the Munich Air Disaster when aged just 20, he played as if every game was for his fallen colleagues, recovering from his injuries to reach the pinnacle for both club and country. In a 17-year playing career with the Reds, he played 758 games and scored 249 goals - both of which were longstanding records until, respectively, Ryan Giggs in 2008 and Wayne Rooney in 2017 surpassed his feats.

Highly coveted by clubs across the country, the young Charlton, nephew of the great Newcastle United striker Jackie Milburn, joined Matt Busby's Manchester United as a schoolboy in 1953 and turned professional with the club in October 1954. After winning the FA Youth Cup in 1954, 1955 and 1956, his first-team debut came on 6 October 1956, against Charlton Athletic at Old Trafford, and the youngster made an immediate impact. He scored twice in the Reds' 4-2 league victory, despite carrying an injury. “Mr Busby asked me if I was okay,” recalled Sir Bobby. “I actually had a sprained ankle, but I wasn’t going to admit to it and I crossed my fingers and said ‘yes’.” Despite his dramatic bow, Charlton didn’t command a regular place until the latter stages of the 1956/57 season, notching 10 goals as Busby's 'Babes' won the league title - the fifth in the club's history. Competition for a first-team spot was intense, but a hat-trick against Bolton Wanderers during the next campaign certainly helped his cause - and Busby found it harder and harder to leave out the powerful young forward. In February 1958, Charlton scored twice in United’s 3-3 draw against Red Star Belgrade as the Babes sealed a place in the semi-finals of the European Cup. Disaster struck on their return, when the aeroplane taking the squad home crashed in Munich after refuelling. Twenty-three people, including eight of his team-mates, perished and Charlton was among those injured. However, his wounds were relatively minor and he was back in action within a month, eventually helping the Reds to reach the FA Cup final. United lost 2-0 to Bolton Wanderers at Wembley, but Charlton and co returned in 1963 to win the same trophy by beating Leicester City. The England international proved to be an integral component of United's rebuilding process after Munich, plying his trade across the field while the rest of the side was constructed. A permanent switch to a deep-lying forward role brought the best from him, and he was vital as Busby's men won league titles in 1965 and 1967. Shortly before the 1966 World Cup, Charlton was named Football Writers’ Association Player of the Year and European Footballer of the Year in quick succession. He went on to play a starring role as Alf Ramsey’s side won the tournament, scoring twice in the semi-final win over Portugal. Charlton earned 106 caps in total – three as captain - and his tally of 49 goals stood as an England record from May 1970 until September 2015 when Wayne Rooney broke it with his 50th strike. Although winning the World Cup is seen as the pinnacle of achievement in football, Charlton’s finest hour at club level came in May 1968 when he captained United to European Cup glory at Wembley. He scored twice in the 4-1 final win over Benfica but famously missed the post-match celebrations, instead conducting a solitary remembrance of the friends he had lost in the Munich tragedy 10 years earlier. The skipper continued to entertain United fans as part of the famed Best-Law-Charlton triumvirate before he retired in 1973. He then spent two years as manager and player-manager at Preston North End before resigning in August 1975. Bobby briefly played for Waterford in the Republic of Ireland in 1976 before accepting a boardroom position at Wigan Athletic, where he took over as caretaker-manager during season 1982/83. In June 1984, Charlton became a director of Manchester United. Ten years later, he was knighted, having previously been awarded the OBE and CBE. A respected ambassador for his club, English football and the game across the world football, Sir Bobby Charlton is a figurehead: a link with the club’s past, present and future.

Match Rewind | Watch one of the greatest nights in United history: the 1968 European Cup final...

United in the Youth Cup: A miscellany

Explore the Reds' glorious FA Youth Cup history as tickets for the 2022 final at Old Trafford continue to be snapped up.

On this day in 2016, the South Stand was named after Sir Bobby Charlton. Here's a memorable goal v Benfica in 1968...

Which photo of the 1960s legend would you love to see on display at Old Trafford?

Take a quick look at Sir Bobby Charlton in action - and the photos we'd like you to choose from...

3 April 2016: Sir Bobby Charlton celebrated a win on the day Old Trafford's South Stand was renamed in his honour...

New banners for Charlton and Law

Stretford End Flags are behind the tribute, which they hope will raise money for charity.

Born in Ashington, made in Manchester

This special documentary pays tribute to one of United's - and football's - all-time icons..

Busby's Dream: The Triumph of 68

Featuring the players, fans' stories and unseen archive from the 1968 European Cup win...

Find out how our Foundation is supporting Sir Bobby Charlton's charity work in Cambodia.