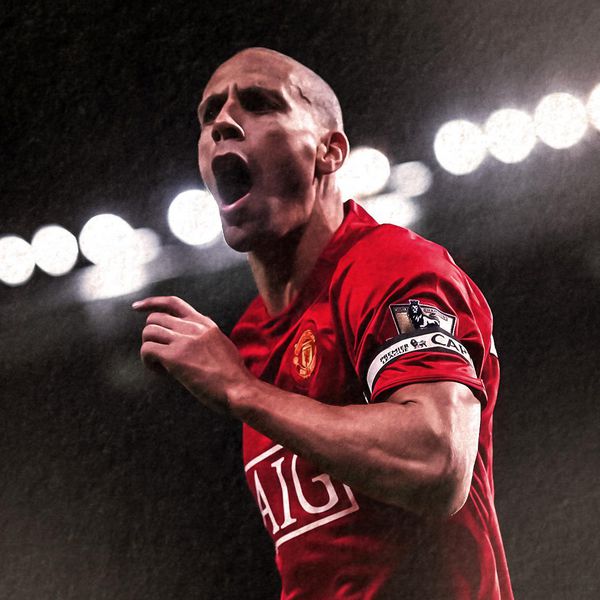 Rio Ferdinand proved himself to be one of the finest defenders in world football during 12 successful years at Manchester United.

Armed with elegance, pace and astute reading of the game, Ferdinand was a distinguished servant from 2002 until 2014, forming one of the most formidable central-defensive partnerships in the club's history alongside Nemanja Vidic.

Ferdinand made 455 appearances for the Reds and scored eight goals, winning six Premier League titles, one European Cup, a FIFA Club World Cup and two League Cups. Rio called time on his trophy-laden stay at Old Trafford on 12 May 2014, saying: "After 12 fantastic years playing for what I regard as the best club in the world, I have decided the time is right for me to move on."

The Peckham-born star initially burst onto the scene with West Ham under the guidance of Harry Redknapp, later signing for Leeds in November 2000. However, the 2002 World Cup was confirmation of Rio's credentials as his performances with England ultimately convinced Sir Alex Ferguson to part with an estimated £30million, a record fee for a defender.

Although his first season was initially hampered by injury, Rio became an integral player as United overtook Arsenal to claim the Barclays Premier League, capping a fine debut season in M16 for the new recruit.

However, in September 2003, disaster struck as Ferdinand missed a routine drugs test and was later banned from football for eight months, not returning until a 2-1 win over Liverpool in September 2004.

After that, Rio consistently justified his tag as a world-class defender, providing the silk to United's defensive steel while chipping in with occasional valuable goals.

In May 2008, Ferdinand signed a new five-year contract to keep him at Old Trafford until 2013. Six days later, he would help United seal UEFA Champions League glory in Moscow; a fitting way to end a near flawless season for the centre-back.

His good form continued into the 2008/09 campaign, playing a crucial role in United's record-breaking clean-sheet run. Certainly, without his consistency at the back, the Reds may not have gone on to win another league title.

Unfortunately, injuries interrupted Rio's 2009/10 campaign and the defender made just 12 starts in the league. He fared slightly better in 2010/11, starting half of United's 38 league fixtures as the Reds marched towards a record-breaking 19th title.

There was further improvement in 2011/12, when Ferdinand was a near ever-present in the back four. Although the campaign yielded no major trophies, the centre-back made 38 appearances and his invaluable experience helped United take the title fight down to the final day.

Predictably, cynics outside Old Trafford dismissed the veteran after he was omitted from England's Euro 2012 squad, but in hindsight they could not have been more wrong following yet another classy campaign in which the title was reclaimed from Manchester City in 2012/13.

Notably, Ferdinand's form warranted a place in the PFA Team of the Year and, after five years without scoring, he even managed to net the winner in Sir Alex's final home match as manager against Swansea.

"Winning can't get boring," Rio said after United sealed the championship with victory over Aston Villa in April 2013. "It's always sweet when you win the title and it was nice to do it at Old Trafford and in the right way: in style."

Rio then signed a one-year contract extension but in May 2014 he decided to bring down the curtain on his stay in Manchester. Ferdinand will be remembered at Old Trafford as a giant of modern football and is widely regarded as one of the finest defenders in the club's history and, indeed, in the English game.

"I joined United in the hope of winning trophies, and never in my wildest dreams could I have imagined how successful we would be during my time here," Rio said. "Circumstances didn't allow for me to say goodbye the way I would have liked, but I'd like to take this opportunity to thank my teammates, the staff, the club and the fans for an unbelievable 12 years that I will never forget."

There wasn't a dry eye in the house on this day in 2013, when Sir Alex managed his final Old Trafford match...

United are understandably well represented as fans are asked to choose the next six inductees.

Six Reds who felt at home at Elland Road Article

'You're in the Premier League now!' Article

This 355-word rallying call from Ferdinand is a must-read before today's Premier League blockbuster at Anfield.

‘Goodness me, Rio Ferdinand!’ We're celebrating our former centre-back's birthday, with this effort from 2006...

Rio Ferdinand outjumped everyone to score a thumping header against Dynamo Kiev, on this day in 2007...

The former defender has certainly done his homework when it comes to our new addition, Donny van de Beek!

Remember when Rio did this? video

It’s 18 years since Rio Ferdinand made his United debut, but we didn’t need an excuse to show this, against Liverpool…

UTD Unscripted: Proud to be half of a pair Article

Concluding an epic pair of long reads, Nemanja pays a personal tribute to Rio... but won't forgive his Moscow tears!

UTD Unscripted: We drove each other on Article

Rio had "never heard" of Vida and didn't rate him when he signed! His story of what happened next is amazing.

Need a reminder of just what a gold-plated United superstar Rio Ferdinand was? Be our guest...

The times we broke the British transfer record Article

Rio Ferdinand was one of the six benchmark signings - can you remember the five others?

Which is United's best-ever partnership? Article

We've nominated five of our favourites, but there are plenty more to choose from in United's storied history.