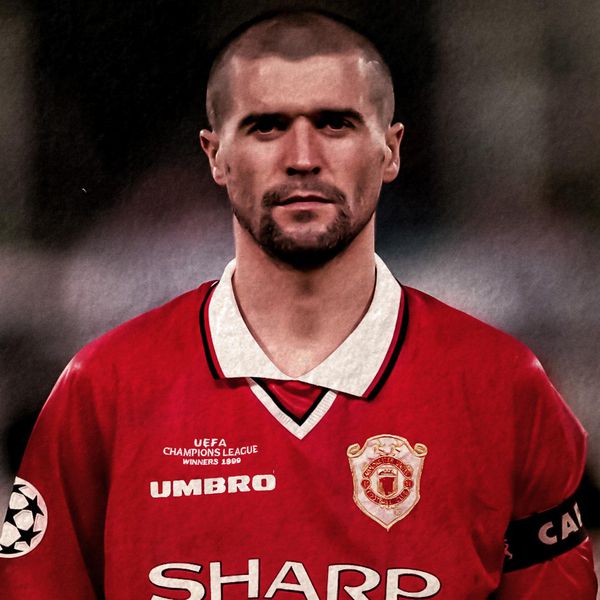 Sir Alex Ferguson labelled him the best he ever worked with, aspiring footballers and Reds everywhere worshipped the ground he walked on: Roy Keane epitomised the unwavering spirit and desire to succeed that Manchester United stands for.

Few sportsmen lead from the front the way Keane did, on and off the pitch - and the fact that more than 70,000 United and Celtic fans paid their tributes to him at his testimonial before he retired in June 2006 says it all.

Images of him rallying the troops, covering every blade of grass in the process define the 1990s for United. He was not afraid to speak his mind in front of the media, particularly if he felt his colleagues were not reaching the high standards he expected.

The Cork-born midfielder began his career with Cobh Ramblers after failing to gain an apprenticeship in English football. Brian Clough took him to Nottingham Forest before he completed a then-record £3.75 million switch to Old Trafford in the summer of 1993.

Two goals on his home debut, a 3-0 win over Sheffield United, served notice of what would follow, and the gladiatorial Keane won the first of seven Premiership medals that season, adding a European Cup, Intercontinental Cup and four FA Cup winners' medals along the way.

He took over the United captaincy from Eric Cantona at the start of the 1997/98 campaign, but his season was cut short by a cruciate knee ligament injury sustained in a tackle with Leeds' Alf-Inge Haaland at Elland Road in September 1997.

The 1998/99 season saw Keane experience a range of mixed fortunes. On his way to leading United to an historic Treble, a sending-off in the FA Cup semi-final replay victory over Arsenal was followed by a yellow card during arguably his greatest display in a Red shirt in the Champions League semi-final second leg against Juventus, forcing him to miss that unforgettable night in Barcelona when United were crowned European champions.

Aside from his influential displays for United, Keane - who scooped Footballer of the Year and Players' Player of the Year awards in 2000 - proved an inspiration to his country and winning close to 70 caps for the Republic of Ireland.

At the time of his departure, Keane was injured, having broken a metatarsal bone in his foot in United's Premiership match against Liverpool at Anfield on 18 September 2005. He was still out of action on Friday 19 November, when a shock announcement to top them all was made.

Manchester United issued a statement through ManUtd.com declaring that Keane's Old Trafford career was over. The Reds had reached agreement with Keane to end his contract immediately, enabling him to join Celtic. In said statement, Sir Alex Ferguson described Keane as "the best midfield player in the world of his generation" and "one of the great figures in our club's illustrious history."

'The Notorious' is back on Saturday night, so let's revisit this 2019 interview about Ole, Sir Alex, Keane and more...

As we welcome Leeds back to Old Trafford, let's look back at this late winner from Roy Keane in 2003...

Solskjaer, Keane and Butt scored in this five-goal thriller against Leeds in November 1998...

'Roy was impossible to replace' video

Alan Smith speaks honestly about the task of filling in for Roy Keane, during this week’s UTD Podcast…

Former Red Alan Smith says that Roy Keane's reputation as a leader should not overshadow his brilliance as a player.

On this day in 1999, captain Keane scored his second of the game to clinch a 2-1 win over Arsenal at Highbury...

Rooney, Scholes, Ibrahimovic: If you think our list of scorers against Palace is impressive, you should see the goals…

Our awe-inspiring former captain gets the 'Match Rewind' treatment. Which game on our shortlist will win your vote?

Did you miss Thursday's live stream? Then watch our 2000/01 thrashing of the Gunners here, on demand...

If you missed Thursday's live stream, no fear, you can just watch the full game here...

Tonight's Match Rewind is a must! Article

Who was better: Keane or Scholes? Article

The legendary duo's former team-mate Luke Chadwick has had his say on one of the classic midfield debates.

Yorke: How I rated Roy Keane as a manager Article

Our former striker played under Keano at Sunderland and saw both sides of the Irishman’s coaching style.

Who did United's stars face most often? Article

The list of the top opponents for some of the Reds' biggest names certainly makes for interesting reading!

Keano’s header, which dragged us back into the tie on that famous night in Turin, was scored 21 years ago today…