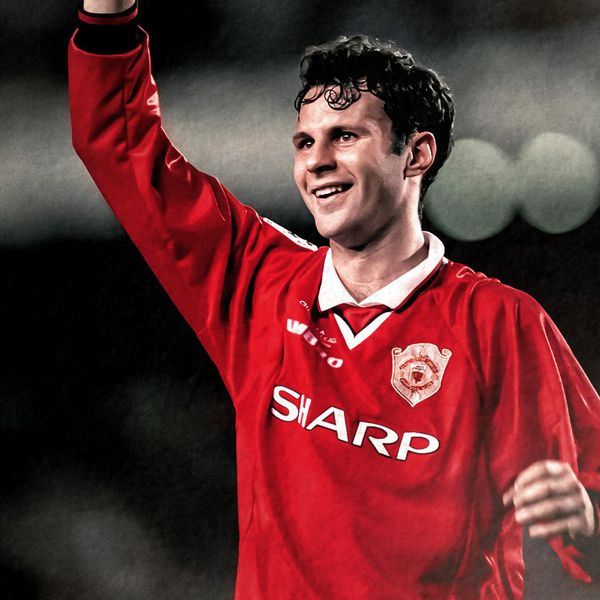 Ryan Giggs closed one chapter of his football career - the epic, decades-spanning story of him as a player - on the same day he started a new one, as Manchester United’s new assistant manager.

That day, Monday 19 May 2014, came nearly a fortnight after Giggs made what proved to be his final appearance on the field - in the Reds’ 3-1 win over Hull City at Old Trafford. At that time he was serving with a dual purpose, playing as a substitute but also managing the first team temporarily. The aptitude Ryan showed in his four-match stint in charge, and the knowledge he had amassed as a player at the club since 1990, made him an ideal right-hand man for new boss Louis van Gaal.

Had van Gaal arrived at Old Trafford in a previous year, he would have had the pleasure of selecting Giggs on his team sheet. The type of player he would have utilised would depend on the year in question - in more than two decades, Ryan adapted and evolved his style from daring and dashing tormentor of full-backs to latterly a calming influence in midfield with a sharp eye for a pass.

By 2013/14, his legs may have lost their explosive acceleration but his brain remained ahead of many a younger rival and his ability to produce telling crosses and assists was never better. In summary, the Welshman was a phenomenon as a footballer - a man to be treasured and talked about in revered tones long after his retirement.

Ryan is United's record appearance-maker of course; he surpassed Sir Bobby Charlton's 758 on the night he helped the Reds secure a third European Cup triumph - his second - in Moscow on 21 May 2008. His eventual total of 963 games for United will surely never be topped with one-club men seemingly now a breed of football’s past.

Yet United's most decorated player might never have graced Old Trafford, had it not been for Sir Alex Ferguson’s intervention. Cardiff-born Giggs was attending Manchester City's School of Excellence in his early teens, but Sir Alex made a personal visit to his house on his 14th birthday and Ryan jumped at the chance to sign for his boyhood favourites.

He turned professional in November 1990 and made his league debut in the old Division One against Everton on 2 March 1991 as a substitute for Denis Irwin. His first league start in 1990/91 also proved a memorable occasion, scoring his first ever goal (albeit via a huge deflection off Colin Hendry) in a 1-0 win over City.

Giggs' first senior trophy arrived in November 1991 as United beat Red Star Belgrade in the European Super Cup final. In the following April, he picked up his second winners' medal as the Reds beat Nottingham Forest in the League Cup final and was voted PFA Young Player of the Year by his peers - an accolade he retained 12 months later. More significantly, 1993 was also the year when Giggs and United won the inaugural Premier League title.

Ryan was an integral part of two Double-winning sides, in 1993/94 and 1995/96, before going one better in 1998/99 by adding the European Cup to the FA Cup and Premier League trophy. His contributions to the Treble-winning campaign included a superb solo goal to win the FA Cup semi-final replay against Arsenal at Villa Park, commonly regarded as one of United's greatest ever goals. Ryan celebrated 10 years at Old Trafford with a testimonial match against Celtic in 2001/02.

A year later he bagged his 100th career goal in the 2-2 draw with Chelsea at Stamford Bridge and became only the second-ever player to play 700 games for United when he helped the Reds to a dramatic 1-0 win over Liverpool at Anfield in March 2007. Two months later, he became a league title winner for the ninth time, beating the record of eight championship medals held by Liverpool legends Phil Neal and Alan Hansen.

In the interests of prolonging his club career at the highest level, Ryan retired from international football with Wales in June 2007 after 64 games and 12 goals. In October 2007, he extended his United contract to June 2009. December 2007 brought two landmark feats - Ryan was awarded the OBE for services to football and he scored his 100th league career goal in the 4-0 home win over Derby County. Ryan crowned the epic 2007/08 season, his 18th in United's first team, by scoring the Reds' second goal in the final-day league win at Wigan and slotting home what proved to be the decisive penalty in the Champions League final shoot-out.

Giggs' career continued with a flourish during 2008/09, when he adopted a more central position in midfield or just off the main striker as the Reds retained the title. He was a deserving recipient of the senior PFA Player of the Year award at long last in April 2009, 18 years after first winning the junior equivalent.

Used primarily in his old wing position during 2009/10, Ryan was one of the Reds' most consistent performers until February when, in a challenge with Aston Villa's Steve Sidwell, he fractured his right arm and missed five weeks of football. Despite not adding to his medals tally that season, there was still much to celebrate personally. He was named BBC Sports Personality of the Year - on 30 November, the day after his 36th birthday - and a few weeks later he extended his Reds contract by another year.

Giggs brought up another landmark as he surpassed Charlton's United league appearances record by playing his 607th game against Liverpool in March 2011. He'd already penned another one-year deal and this was no sentimental gesture by Sir Alex: his elder statesman continued to produce some instrumental performances both in the middle and out wide. The 2010/11 title triumph was Giggs' 12th in total: more than most of the clubs in existence.

In what was increasingly becoming his forte, Ryan continued his spree of record-breaking into the ultimately disappointing campaign of 2011/12. In February 2012, he celebrated his 900th appearance in style by scoring an injury-time winner at Norwich City. Even in the final game of the season, as the Reds earned a victory that was so close to earning another title, he was charged with the responsibility of playing just behind Wayne Rooney at Sunderland and pulling the strings - only being denied a goal by Simon Mignolet's stunning save.

There was no time to dwell on the despair that followed in the seconds after the final whistle at the Stadium of Light. Giggs was to get his wish of performing in a major tournament when named captain in Stuart Pearce's Great Britain Olympic squad. It meant he would miss his first pre-season tour but was a fitting tribute to his talents.

Anybody who viewed the event as some kind of swansong were shown to be foolish months later as Giggs, despite a slow start to the 2012/13 season, continued to influence matters at Old Trafford - particularly from December onwards. Notably, the Welshman clocked up his 1,000th career match for club and country in the glamour tie with Real Madrid just days after signing yet another contract extension. Of course, the Premier League title was won just weeks later, with Ryan showing little sign of letting up in his pursuit of continued excellence.

The 2013/14 season marked a new beginning for Giggs and United, as he found himself working for only his second club manager following the retirement of Sir Alex Ferguson and the appointment of David Moyes. Ryan joined the new man’s coaching staff but continued to play, eventually making 22 appearances in an arduous and fruitless campaign. When Moyes left his post towards the end of the season, Giggs was asked to take up the reins and guide the team through the final few games as interim manager.

He was also asked to pick up a very special accolade - a Lifetime Achievement Award at United’s end-of-season dinner in May. An accompanying video of tributes from past and present world football stars including Pele, Cristiano Ronaldo and Alessandro Del Piero reinforced Ryan’s stature as one of the beautiful game's greatest-ever talents and provided a poetic end, as it soon transpired, to his remarkable and epic playing career.

When it comes to nail-biting Premier League games at Fulham, this one starring Cristiano Ronaldo set the template...

When Ryan Giggs was on the loose, the end result was inevitable. Check out his goal against QPR, on this day in 1993...

As United welcome Watford to Old Trafford, let's look back at this elegant Ryan Giggs goal against the Hornets...

We recall Reds legends who've delivered on 26 December down the years.

Scholes, Viduka, Solskjaer (two), Giggs, Harte and Bowyer all scored in this battle at Elland Road in March 2002...

Ryan Giggs scored a matchwinning double at Anfield, on this day in 2003…

Our Welsh wizard scored the fourth and final goal as United won 4-1 at Villa Park, on this day in 2007...

Before our trip to St. James' Park, here's Ryan Giggs's outstanding volley against the Magpies in 2010...

Want to see an outstanding free-kick? You're in luck, watch this screamer from Giggsy in 2009...

This may surprise you, but the first of Ryan Giggs’s 109 Premier League goals was a header…

How many can you recall? Have a think and then check out the long list, which includes some famous names...

Phil Neville's first league start came against City, but which other Reds began their United careers against the Blues?